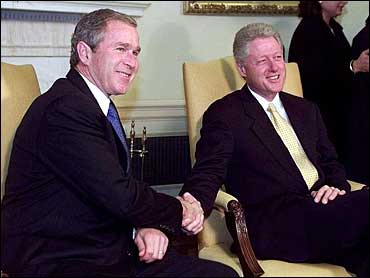 The federal commission investigating the Sept. 11 attacks will soon ask President Bush, former President Clinton and their vice presidents to testify in public about possible warnings they might have received from U.S. intelligence sources before the attacks.

"We need them to testify," former New Jersey Gov. Thomas H. Kean, the bipartisan commission's chairman, told The Record of Bergen County in a story published Thursday. He said the panel would issue formal invitations within the next few weeks, although he conceded that all four men would probably decline to be questioned at a public forum.

However, Kean said their cooperation was crucial to the commission's work, so he hoped they would at least consent to private interviews with the panel.

"They all have important pieces to tell us and important questions to answer, so they will all be getting an invitation and we're in contact already with their staffs in every case," Kean said Wednesday on public television's "The NewsHour with Jim Lehrer."

Mr. Bush said in an NBC interview broadcast this week that he would "perhaps" submit to questions from the commission.

"These are issues that we continue to discuss with the commission in a spirit of cooperation," McClellan told reporters traveling with Mr. Bush to Pennsylvania. "We will talk to the commission about these issues."

Mr. Clinton has previously said he would be willing to testify.

Kean's commission has struggled to get access to some administration records.

Kean recently agreed with the White House that members who had reviewed some key presidential daily briefs — the daily intelligence reports given to Mr. Bush — can report back to the commission at large.

That resolved a dispute over whether the members who have viewed the reports could discuss their contents with others. Earlier, the panel had to press for any access to the daily reports.

The White House confirmed last year that one such report in August 2001, a month before the attacks, mentioned that al Qaeda might try to hijack U.S. passenger planes. National security adviser Condoleezza Rice has described the report as an analysis, rather than a warning, and said hijacking was mentioned in a traditional sense, not as it was used on Sept. 11.

According to a Congressional probe into the Sept. 11 attacks, the president's Aug. 6, 2001 daily briefing included information "acquired in May 2001 that indicated a group of Bin Laden supporters was planning attacks in the United States with explosives."

It referred to an al Qaeda support base in the United States, and FBI "judgments about patterns of activity consistent with preparations for hijackings or other types of attacks."

The commission has issued subpoenas to the Federal Aviation Administration and to the Pentagon, after concluding that government offices had not fully complied with requests for documents.

Following the commission's request, Mr. Bush recently extended the deadline for the panel's final report from May to July. Some Republicans had resisted this move because it means the report will come out with the fall presidential campaign just around the corner.

Late last year, Kean hinted that the Sept. 11 attacks might have been preventable. "This was not something that had to happen," he told CBS News Correspondent Randall Pinkston.

Kean's panel has had problems of its own.

The New York Times has reported the director of the panel's staff, Philip D. Zelikow, has been interviewed by his own subordinates because he was an adviser on foreign policy to the team that oversaw the transition from Mr. Clinton to Mr. Bush.

The panel says Zelikow faces no conflict of interest problems because he has recused himself from any part of the investigation that concerns matters he worked on during the transition. But, The Times reports, the panel's counsel is weighing whether that recusal goes far enough.

One of the ten commissioners has also been questioned by panel staff. Jamie S. Gorelick was a deputy to Attorney General Janet Reno and so might have knowledge of the federal response to terrorism under Mr. Clinton. Gorelick has also recused herself from matters related to her former work, The Times reports.

The newspaper says at least three commissioners, including Gorelick, have had to recuse themselves from some subjects because their law firms had airlines as clients. And besides Zelikow, other staff members have had to make selective recusals as well, The Times reports.

All the recusals could undermine the credibility of the panel, which faced questions early on over possible conflicts of interest.

The original chairman Henry Kissinger, a former national security adviser, resigned rather than disclose his lobbying clients, as some victims' family members had insisted.