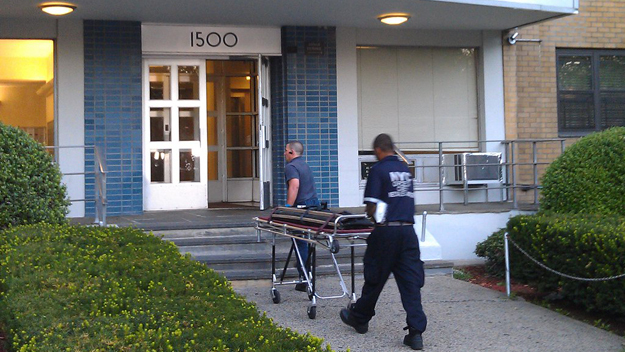 NEW YORK -- A former teacher who laced her two young children's grape juice with windshield wiper fluid, then drowned them in a bathtub promised on Tuesday to raise awareness of postpartum depression before a judge sentenced her to eight years in prison.

Dressed in an all-white suit, her hands cuffed behind her back, Lisette Bamenga spoke quietly to Judge Martin Marcus, who found her guilty in April of manslaughter in the July 2012 deaths of 4-month-old Violet and 4-year-old Trevor. She had been charged with murder, but her attorney argued she suffered from crippling undiagnosed postpartum psychosis. The judge agreed she suffered from an emotional disturbance severe enough to knock down the charges.

"Never in my mind would I hurt anyone, especially my children, who meant the world to me," the 32-year-old Bamenga said. "After this tragedy, I'll make it my mission to raise awareness about postpartum depression so that other families won't suffer through what I've suffered."

Bamenga was portrayed as a model mother and dedicated third-grade teacher at Public School 58 in Carroll Gardens, a leafy brownstone Brooklyn neighborhood. About a dozen supporters, some of whom were former parents of children she taught, attended the sentencing in Bronx State Supreme Court and helped raise about $20,000 for her defense.

Her mother, Liliane Bamenga, who cried and prayed after the sentencing, said outside court that she believed the sentence was fair.

"We don't have anything to say but thank you, Jesus," she said. "Just give thanks to God. There's no joy because we lost two kids, two beautiful kids."

The children's father, Trevor Noel, didn't attend. His aunt Susan Boose stormed out of the courtroom as soon as the judge announced the sentence.

"I feel like there really is no justice in this situation," she said. "Lisette played judge and jury in the lives of her children. Not only did she sentence us to a life of misery and pain ... eight years, that's not enough time because she can have more children and put other children in danger."

Bamenga's attorney Michael Dowd had argued during her trial that she wasn't in her right mind when she killed her children. After Bamenga drowned the children, she turned on the gas stove and slit her wrists. Emergency crews responding to the smell of gas at their Bronx apartment found her and the children's bodies.

But prosecutors argued that Bamenga acted in a jealous rage after learning her boyfriend had fathered a child with another woman and that she coldheartedly pulled off the killings to punish him. They asked for 20 years on each manslaughter charge.

But the judge gave her eight years on each count to run concurrently, saying it was the most difficult sentencing he's done during his 26 years on the bench. He received 18 letters from psychiatrists, 32 letters from friends, colleagues and parents of her former students, and nine from jail staffers who said she's been a model prisoner.

"Postpartum psychosis is very real and a devastating illness ... especially when undiagnosed," he said.