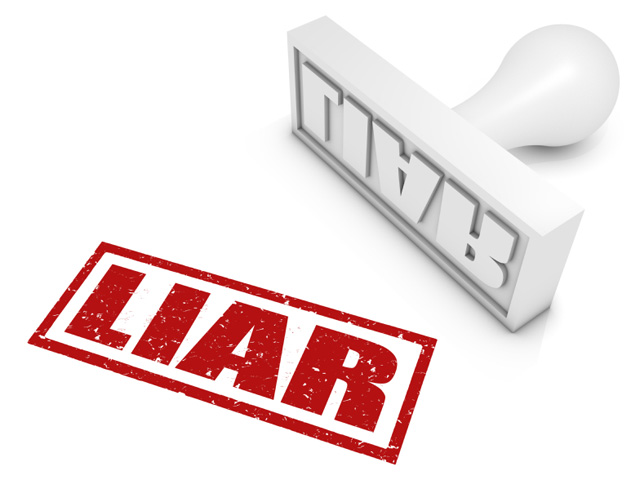 (MoneyWatch) Nobody likes to be lied to -- by their friends, family, and certainly not at work. While the occasional white lie might be permissible or even advisable in the office, being routinely deceived by your co-workers, staff, boss, or clients will leave you in the dark and amounts to a huge career liability.

Here are 8 ways to tell if you're getting the straight truth from someone at the office:

There's a disconnect between the situation and emotions. Let's say there has been a leak of important internal information that has sent your stock price plummeting. If the person sharing the news doesn't seem upset, that's a red flag they might be the source of the leak. "A liar will display a general discrepancy between their emotional tone and the situation at hand," says Pamela Meyer, author of "Liespotting: Proven Techniques to Detect Deception." "In this case, [it might be] replying when asked, 'Do you know who might have done this?' with a withdrawn, monotone voice, expressing no particular emotion."

5 smart ways to disagree with your bossConstructive criticism: 5 ways to get your point heard, every single time6 ways to get shy employees to speak up

They avoid your question. Someone who doesn't want to lie but finds themselves cornered will avoid responding to your question altogether. What's left unsaid is a lie of omission. "Liars feel like they haven't lied when they don't answer your question by changing the subject or by asking you a question," says Dan Crum, a former polygraph examiner, special investigator with the CIA, and author of the book "Is He Lying To You?"

The person swears to God. People who have something to hide will make grandiose statements to try to hide their fib. "Professional interrogators often hear, 'I swear on the bible I know nothing about this,' or, 'To tell you the absolute truth,' " says Meyer. If someone is telling you the entire truth, they don't need to clarify that by telling you they are doing so -- it's just implied.

He or she is more or less animated than usual. If you suspect someone of lying, ask them a targeted question and then notice how they respond. Are they acting normal, for them? "An example might be that during small talk a person is animated and gestures when they speak and in response to your targeted questions they answer without any gesture," says Crum.

They're fiddling and looking down. Avoiding eye contact, slumping, or nervously playing with hair or a tie could all be signs of lying, says Meyer. But again, the key is what's normal for that person. "Don't jump to conclusions -- know your subject's norm, their baseline behavior. But note that liars tend to subconsciously attempt to disappear by slumping and lowering voice, while honest people if wrongly accused often raise their voice and appear visibly angry."

They display unconscious movements. Crum says to notice which parts of a person's body are at rest before you ask them a question. Ones that move are what he calls "awakened sleeps points" and this movement may signal a lie. "When a person lies their body wants to release the stress they feel over the fear of detection and their brain causes their body to automatically respond (the Fight, Flight or Freeze response) by waking up sleep points. You might see a person uncross their legs or tilt their body when answering your question," says Crum.

They're specific when denying wrongdoing. Liars will deny specific, not general, behaviors, Meyer says. For instance, someone hiding an indiscretion at work might say, "I did not speak to xx in the competitor's product department," while someone who's in the clear might protest, "Are you kidding? I have never spoken to anyone in that company and never would!" Another example: Bill Clinton didn't say he didn't have an affair; he famously said, "I didn't have sexual relations with that woman." And, well, we know how truthful that statement was.

They react incorrectly to a baited question. Crum suggests asking a baited question, such as, "When I review the office security camera, will I see you stealing office supplies?" The trick is that there is no hidden camera. If the person starts to explain why you might see them apparently helping themselves to unwarranted supplies ("it's not what you think"), you know something fishy is going on. If the person confidently says "no" and doesn't take the bait, they're probably in the clear.

At Whole Foods, paychecks are public

Trouble at the office: When to go to HR, and when not
Amy Levin-Epstein