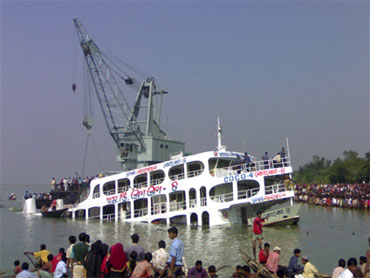 The death toll from the capsizing of a ferry over the weekend in southern Bangladesh rose Monday to 75 after rescuers recovered an additional 17 bodies.

Bayezid said the bloated bodies were found within less than one mile of the site of the accident. Rescuers were using boats to go further downstream because some bodies may have been washed away during high tide.

The M.V. Coco was packed with hundreds of travellers leaving Dhaka to head home for the Islamic festival of Eid al-Adha when it tilted and went down after reportedly hitting a river shoal.

It started to take on water as it arrived at Nazirhat town in the coastal district of Bhola, about 60 miles south of the capital.

Rescuers said many of the bodies were pulled from inside the submerged cabins and hulls of the ferry after it was righted by a rescue ship on Sunday.

He said the rescue ship was trying to drag the ferry closer to the shore to make it easier to search.

Authorities said there were no passenger lists, so it was unclear how many people were aboard the vessel, but Dhaka's private ETV television station said it could have been carrying more than 1,500 people. The boat was approved to carry 1,000 people.

Officials would not say how many remained unaccounted for. Dhaka's mass circulation Prothom Alo daily said it could be 50.

The paper has based its estimate on the families reporting missing relatives.