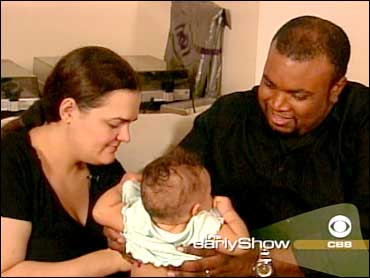 They don't call it potty training, but this new technique achieves the same result. Babies as young as 7 months are using the potty and parents are throwing away the diapers.

The Early Show medical correspondent Dr. Emily Senay went to the Twelker household where the call of nature is just a whisper in the ear: "Ssss-sssss."

When Kate Twelker thinks her 4-month-old baby Lucia needs to go, she is right there for her with the potty.

But don't call it "potty training," call it "elimination communication." From day one, parents get their infants used to responding to the need to go.

"She was miserable every time she peed in her diaper," Twelker says. "For me, it's making her happier, and it's developing that rapport between us — that extra level of trust."

Christine Gross-Loh raised her own two boys using the technique, and works as a mentor through a Web site called diaperfreebaby.org to help other parents recognize and respond to their baby's natural urges.

"In a sense your baby is teaching you," Gross-Loh says. "It's about communicating about a basic need that your baby is expressing to you from the time it is born. They don't want to soil themselves; they are aware of when they want to go to the bathroom. They may fuss or squirm or grimace and, as a parent, if you start to tune into these signals, just as you tune into your child's need to eat or sleep, then you learn when it has to go to the bathroom."

Some experts are not convinced.

Dr. Chris Lucas of New York University Child Study Center, says, "Prior to 18 months, children aren't aware whether their bladder's full, whether they're voiding, whether they're wet, and abilities to communicate those things to parents are limited."

But Twelker hopes that the benefits will go beyond potty training.

"When she is able to walk by herself, hopefully, she'll know she can just walk over to the potty by herself," she says. "To me, any way that I can communicate with her, any additional way, means we're going to have a better relationship, now and in the future."

Currently there are 35 "Elimination Communication" groups around the country organized by diaperfreebaby.org. These groups bring together moms who share information and support each other in the quest to have a diaper free baby.

In this increasingly competitive world of parenting, you are certainly going to find those who see this as one more way to get junior ahead of the rest of the pack. But Dr. Senay says that would really be in opposition to the spirit of what these groups are trying to accomplish. They set no age by which they say kids need to be diaper free. They really are saying that kids and parents need to tune into each other and respond to each others cues.

As for working parents, caregivers who are following parents' instruction can certainly do this. And elimination communication can be part time. It does not have to be all the time.