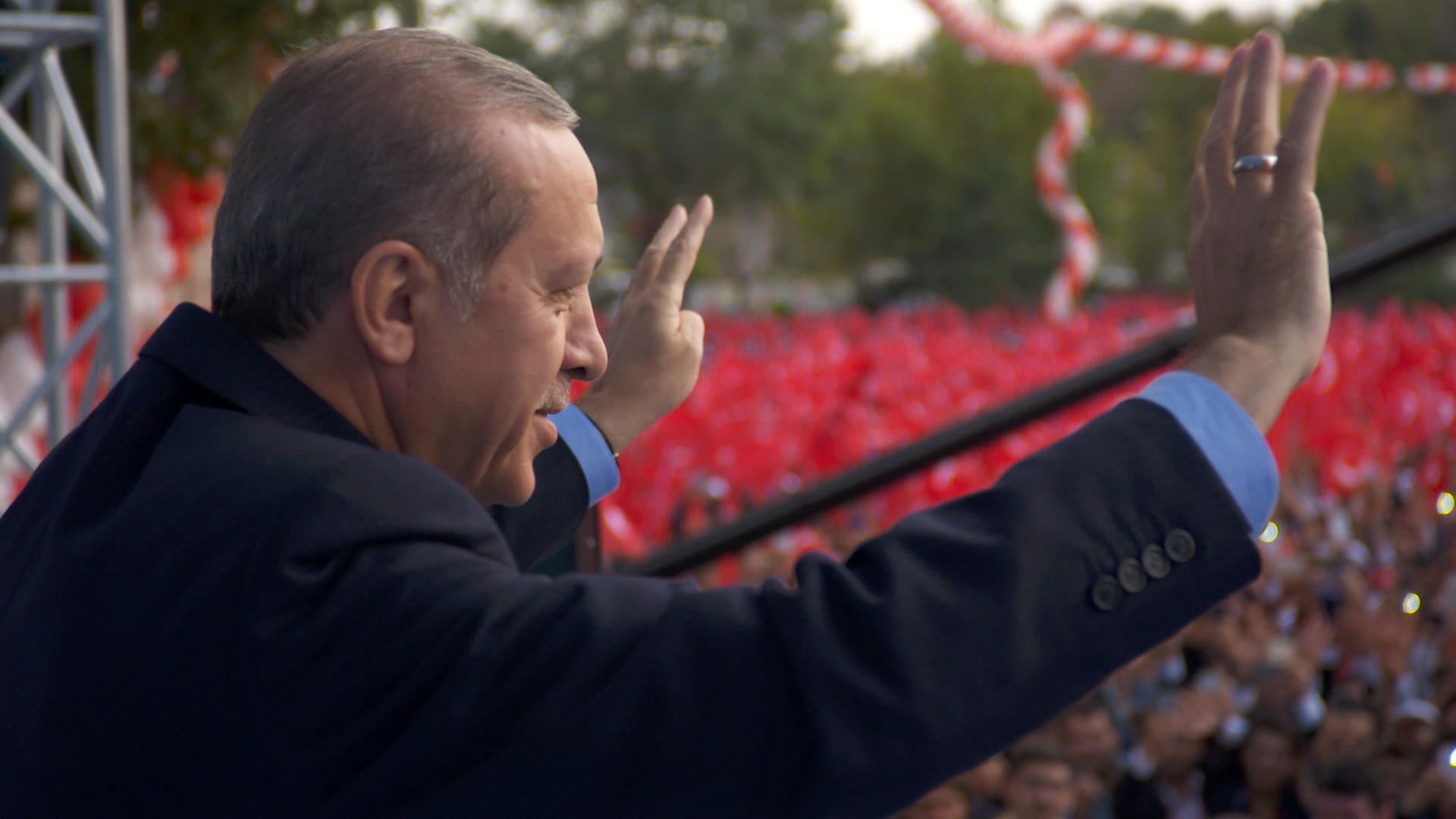 Editor’s Note: The original version of this story included a video clip that showed Greek police officers arresting Turkish military personnel. That shot was included in error and has now been replaced.

The following script is from “Turkey,” which aired on Nov. 20, 2016. Steve Kroft is the correspondent. Michael H. Gavshon, Howard L. Rosenberg and David M. Levine, producers.

When Donald Trump is sworn in as the 45th president of the United States, he’ll be forced to deal with a lot of complicated international issues, especially Turkey. It is an indispensable but angry NATO ally right now, led by an assertive, strong-minded president who you will hear from shortly, Recep Tayyip Erdoğan. He’s been making noises lately about perhaps going his own way in the Middle East, and is being courted by Russia. If it sounds Byzantine, it should be noted that the word was coined to describe the complicated history and politics of this land. With war raging on two of its borders and inundated with refugees, Turkey is right in the middle of things, as it has been for the past 2,000 years.

Its largest city sits astride the Bosporus Strait, a body of water that separates Asia from Europe, East from West, and the Islamic world from Christendom. It was known as Byzantium at the time of Christ, and Constantinople in the Middle Ages, before the Ottoman hordes overran the city, converted the cathedrals into grand mosques, and ruled an empire that lasted 600 years. Today, Istanbul and the Republic of Turkey still have a foot in both cultures, a Muslim population, a Western-style democracy and NATO’s second largest army, in the most dangerous neighborhood in the world.

James Jeffrey: Extremely important, extremely complicated, at the top of the next president’s agenda.

James Jeffrey: First of all, it’s location. Location is everything.

Former U.S. Ambassador James Jeffrey spent much of his diplomatic career in Turkey, a country that shares borders with Syria, Iraq, Iran and the Black Sea to the north with Russia. But more importantly, Turkey also plays host to the United States and other NATO countries at a number of critical air bases like Incirlik… that serve as staging areas for military operations in the Middle East, and are vital to projecting U.S. military power all the way from Europe to India.

Steve Kroft: And how important are those bases?

James Jeffrey: They’re extremely important. We could not be doing the campaign against ISIS right now in Northern Iraq and in Syria without these bases.

Steve Kroft: So the U.S. can’t afford to lose those bases?

This is the man who allows the U.S. access to those bases, President Recep Tayyip Erdoğan, the conservative, nationalistic -- some would say autocratic -- leader who has governed the democracy for the past 13 years. We met him last month, at the brand new 1,100-room palace in Ankara, which is emblematic of Erdoğan’s admiration for the grandeur of Turkey’s Ottoman past, and his ambition to make it once again the most powerful country in the region.

But Erdoğan is upset with the U.S. policies in Syria that, he says, have led to a clear and present security threat on his southern border, interfered with his ability to defend his country, and inundated Turkey with nearly 3 million refugees. Twice the number that has flooded into Europe.

“Well, let me be very frank in my remarks and I’ve been known for my candor. I wouldn’t speak the truth if I said I was not disillusioned. Because I am disillusioned.” President Erdogan

Recep Tayyip Erdoğan: We have addressed these issues, discussed them with President Obama and Vice President Biden. They failed to rise to the occasion and handle these issues seriously. This is quite upsetting for us.

Steve Kroft: You seem very frustrated with the United States.

Recep Tayyip Erdoğan: Well, let me be very frank in my remarks and I’ve been known for my candor. I wouldn’t speak the truth if I said I was not disillusioned. Because I am disillusioned.

President Erdoğan is not the only one in Turkey disillusioned with America right now. So are many of his countrymen, who feel that their Western allies care more about their own interests than Turkey’s.

Most of the tension and anti-Americanism can be traced back to the night of July 15th here in the heart of Istanbul. Factions of the Turkish military shut down the Bosporus Bridge that connects Europe and Asia and launched a coup to overthrow the elected government.

It wasn’t long after that F-16s commandeered by a rogue faction of the Air Force streaked fast and low across the skies of Istanbul and Ankara…sonic booms shattered windows. The plotters used tanks and troops, to seize strategic buildings and military bases, and shut down Istanbul’s main airport. And in something never seen before in the capital of NATO country, the parliament in Ankara was bombed, and helicopter gunships strafed the presidential palace. Soldiers stormed television stations and announced that Turkey was under martial law.

President Erdoğan, was on vacation with his family when he learned a coup was underway. He wanted to address the country, but had no access to the media. So he used the FaceTime app on a borrowed phone to call into a Turkish television station. He pleaded for people to take to the streets and fill the squares.

Tens of thousands responded. Facing down tanks and helicopters. As volleys were fired into crowds, Erdoğan boarded a plane and flew towards Istanbul.

Steve Kroft: were you afraid for your life and the lives of your family members?

Recep Tayyip Erdoğan: Steve, in our faith there is a concept. We surrender ourselves to death. If you’re the leader you have to communicate the message of immortality to your people. Because I believe if a leader hides behind a rock, then the people will hide behind a mountain.

His return to Istanbul proved to be the turning point by daybreak the coup attempt had failed. More than 200 were dead.

Erdoğan immediately blamed the revolt on his arch-enemy, an elderly and exiled cleric name Fethullah Gulen, whose followers had infiltrated the highest levels of the Turkish military, judiciary, and civil service. For the past 17 years, Gulen has been leading a reclusive life in the United States on a 26-acre retreat in the Pocono Mountains. For months, Erdoğan has demanded that his American ally return Gulen to Turkey.

Recep Tayyip Erdoğan: This man is the leader of a terrorist organization that has bombed my parliament. We have extradited terrorists to the United States in the past. And we expect the same thing to be done by the United States.

The U.S. is insisting that the extradition process must be handled through U.S. courts to evaluate the evidence. The delay has created widespread suspicions here that the U.S. government is protecting Gulen and that its intelligence agencies may have been involved or had advance knowledge of the coup. Members of Erdoğan’s government have suggested that publicly. The U.S. has denied it.

Steve Kroft: Do you believe that there was any U.S. involvement?

Recep Tayyip Erdoğan: I’m not going to blame the United States. But that’s what my people will think. Why are you still keeping that man? So as long you harbor him there, I’m sorry, don’t get offended. But this is the-- perception of the Turkish nation and the Turkish people.

Steve Kroft: I’m taking it from your answer that you have done nothing to discourage the Turkish people from believing that.

Erdoğan had begun a crackdown on the Gulenist movement and other perceived enemies before the attempted coup. After it, he used a state of emergency to begin a massive effort to purge them from government and Turkish society. More than 30,000 people have been arrested or detained including generals, judges, prosecutors, mayors, members of Parliament, teachers and journalists. Another 100,000 people have been fired or suspended from government jobs. And 150 media outlets have been shut down.

Steve Kroft: Some critics in Turkey and some people in the United States have said that this is an overreaction. This is a crackdown on the political opposition, not a crackdown on terrorists?

Recep Tayyip Erdoğan: In Turkey, they attempted to destroy my state. And of course, we could not remain silent. We could not remain indifferent. And these measures are being taken by prosecutors and judges in full accordance with the rule of law.

There are not many people in Turkey today eager to publicly criticize the government. Soli Özel is an academic and a prominent political commentator.

Soli Özel: We are moving in that direction, yes. The presidency has now accumulated a lot more power than is stipulated in the constitution. And it will continue to accumulate more.

Recep Tayyip Erdoğan: This is misperception. It is out of the question. We have saved our country from the hands of a heinous coup. And we are very much determined to protect our democracy.

There is a strong bent of authoritarianism that runs through Turkish history and Turkish life and Erdoğan’s message and actions have played well with the public. After the failed coup, his approval rating jumped to 68 percent. Much of that support comes from more traditional, conservative Muslims, who have long been marginalized in Turkish society. Erdoğan has embraced them, courted them and included them in his government.

Ece Temelkuran: He is a brilliant politician when it comes to talking to common people and with their discourse.

Ece Temelkuran is a Turkish writer who chronicles the country’s cultural and political changes. She believes this is all part of Erdoğan’s vision for a new Turkey.

Erdoğan’s new Turkey has been a source of concern in Washington. While the two NATO allies still share the same goals of replacing the Assad government in Syria and defeating ISIS, each country has its own special interests and priorities. And in some cases its own allies. The United States is obsessed with ISIS. Turkey is obsessed with Kurdish separatist groups that have been waging a decades-long war inside their country. This is where it gets complicated. The U.S. is supporting and arming Kurdish groups that Turkey considers bitter enemies, and they have responded by bombing the U-S allies.

Into all this acrimony between Erdoğan and the United States has stepped Russian President Vladimir Putin, one of first world leaders to express solidarity with Turkey after the failed coup. Since then the two countries have finalized a major pipeline deal… and agreed to step up military and intelligence contacts.

Steve Kroft: Are you reevaluating your alliance and relationship with NATO and the United States?

Recep Tayyip Erdoğan: Right now, such a thing is not in question. We are moving in the same direction with NATO that we have always done.

According to one informed observer, what Erdoğan is really looking for is an answer to this question: Is the U.S. truly committed to use all of its power, including its military, to preserve order in the region, stop terrorism and protect the interests of Turkey. Yes, or No?

It’s a difficult question to answer because the Middle East is such a messy place. But right now it looks like the answer from Donald Trump may be yes. His aides have described Turkey as a vital ally and called for the extradition of Fethullah Gulen and Trump himself has suggested he has high hopes for a closer relationship.