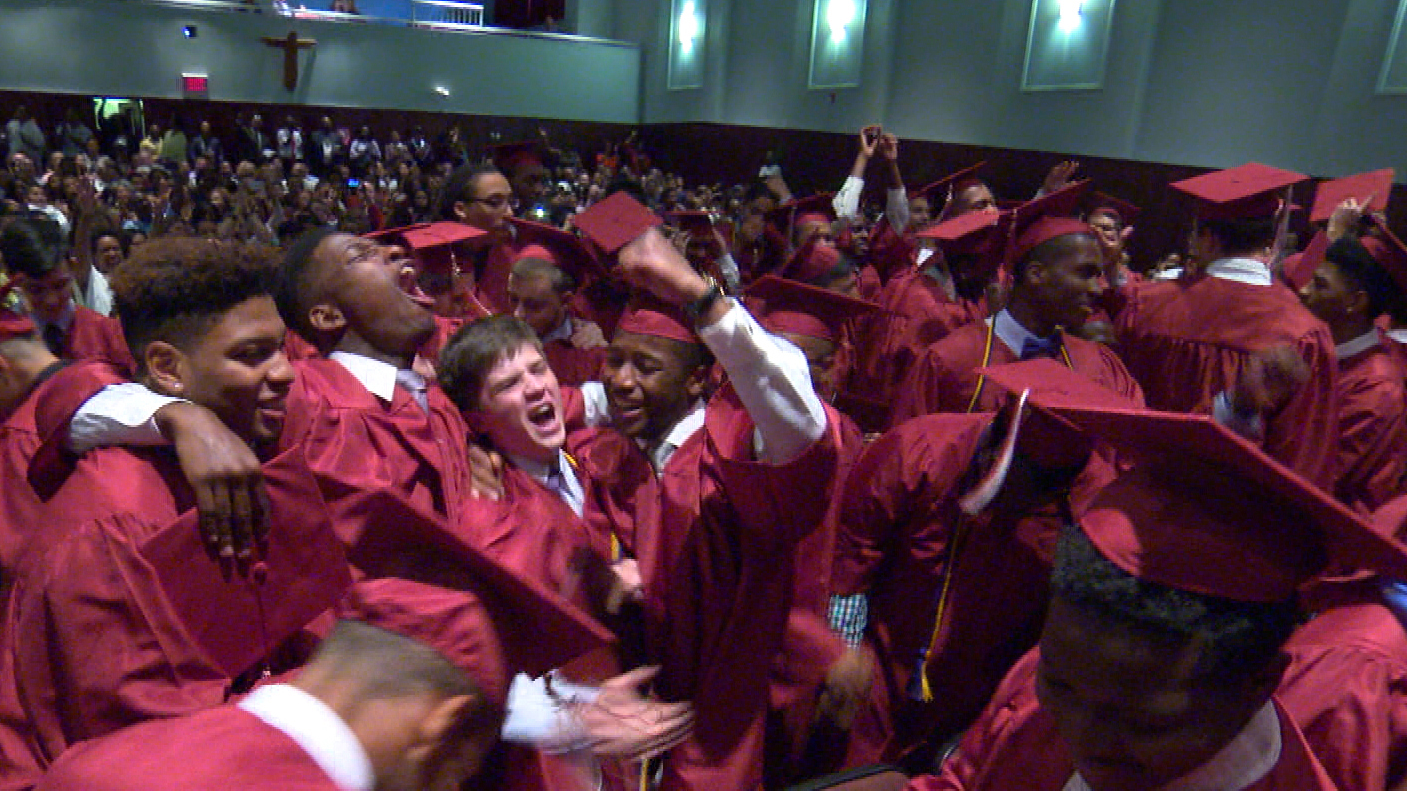 The following is a script from "The Resurrection of St. Benedict's" which aired on March 20, 2016, and was rebroadcast on June 26, 2016. Scott Pelley is the correspondent. Guy Campanile, producer.

St. Benedict's Prep was 100 years old when time ran out on Newark, New Jersey. It was 1967 and all hell broke loose around the very proper, very white Catholic boy's school. Unemployment, racism, and police brutality had ignited the inner city. And even the monks who ran St. Benedict's, lost faith. But the school's namesake, the patron saint of students, must have seen the future. Because, as we reported in March, no generation needed the resurrection of St. Benedict's more than the minority kids who now fill its neighborhoods.

Before Newark had a skyline, St. Benedict's red brick campus rose on a hill. Over decades its walls have grown but it's no citadel against the world.

Inside is the inner city. Half the boys are black, another third Hispanic, and nearly all come from low income neighborhoods. They call each other "brother" and every morning all 550, grades 7 through 12, celebrate a revival.

Their day begins with a chant they call "The affirmation.'"

You can be any good thing you want to be. "Go and conquer."

And if you don't see discipline, just watch.

Senior group leader Bruce Davis has order in the palm of his hand. This is a large part of what makes St. Benedict's rare and successful. Students are required to run much of the school. Davis is their elected leader.

Bruce Davis: Benedict's men are different than the guys you see outside, you know every single day. We learn what we're willing to accept, which is nothing but the best, nothing but finishing what we started.

Students are organized into groups that compete for the top grades so the boys press each other to study. The student groups coordinate events and set the schedules.

["Whatever hurts my brother, hurts me."]

That's the school motto, "Whatever hurts my brother, hurts me."

Scott Pelley: If one guy is missing you know about it?

Scott Pelley: You ever send a team out to go find somebody who's out on the street?

Bruce Davis: That's exactly. You know, if he's out, if the parents don't know where he is we have to find him cause he has to be in school.

Putting students in charge was a revelation, nearly 50 years ago of this Benedictine monk, headmaster Edwin Leahy.

Edwin Leahy: It's a population that never gets to have control.

Scott Pelley: With the kids running their school I wonder how often do you have to get in front of a really bad decision?

Edwin Leahy: You hope you can sort them out afterwards.

Scott Pelley: Afterwards, you let them make a mistake?

Edwin Leahy: Yeah, because-- yeah, that's a better learning experience for them.

Scott Pelley: You know there are teachers and administrators watching this interview right now who are saying he is describing chaos.

Chaos wasn't tolerated when Leahy was a student here in the "white old days" of 1959. He joined the faculty shortly after the riots in '67 when white families were fleeing Newark.

Scott Pelley: And the decision was made to close the school.

Scott Pelley: And there was talk of closing the monastery itself.

Edwin Leahy: There was some who wanted to do that and move it somewhere else, yeah.

Scott Pelley: Not you.

Edwin Leahy: No, not me.

The school closed for one year. Then, Leahy, at age 26, decided to try again.

["You didn't do anything to get the talent, somehow God gave it to you."]

He had no idea how to run a school. But he took inspiration from The Good Book, The Boy Scout handbook, which organizes boys to lead themselves.

[Bruce Davis: Who's the assistant headmaster?]

For incoming freshmen there is a boot camp. And during a sleepover in the gym they learn St. Benedict's history and what's expected.

[Bruce Davis: You need to be on the same page or else you will do it again!]

It can feel more like Marine Corps than common core.

Ten years ago, a graduate enlisted midshipmen from the U.S. Naval Academy to add their "inspiration."

[Midshipmen: Get back there and start again! MOVE!]

We got the sense the guys would have been happier without the help.

["Why you on your knees while your brothers are pushing?"]

Bruce Davis: The main point is to make the freshmen, or the incoming freshmen realize that the guys around him are there for him no matter how hard the situation can get.

Scott Pelley: The boy scouts do it, the Marine Corps does it, street gangs do it.

St. Benedict's is private. The school year is 11 months. And there is an entrance exam, but exceptions are made as you will see a little later. A bigger barrier to families would be the annual tuition of 12,000 dollars. But 80 percent pay only half. Which leaves Leahy scavenging for another 6 million a year.

Scott Pelley: It's the alumni who close that gap?

And we discovered something mysterious about Leahy. He cringes when you bring up sports. Not because he's losing, his basketball team ranks 12th nationally. His soccer team is first in the nation. But Leahy believes it is education that saves lives.

Devionne Johnson was a sophomore we met in his downtown neighborhood.

Devionne lives with his grandmother -- a mile from St. Benedict's and a doorstep from trouble.

Scott Pelley: You know when we drove up here and we got out in the parking lot and, we couldn't help but notice this. Nine-millimeter right here in front of your house.

Scott Pelley: You hear gunfire around here much?

Scott Pelley: What have you seen?

Devionne Johnson: Ten years in this neighborhood, I feel like I've seen it all. All it is the same situation, different faces.

Scott Pelley: So how do you stay clear of that?

Devionne Johnson: First, you have to realize what type of person you want to be in life.

Devionne realized what kind of person he wanted to be while wandering in the wilderness.

Edwin Leahy: It's the only class in school that a 98 is a failing grade cause if you only get 98 percent of the way down the trail, you didn't get to the bus to bring you back home.

In Devionne's group one classmate decided "98 percent" was all he had.

"You got to keep pushing bro"

Devionne Johnson: So I said, "You're not gonna quit in front of the camera. These are-- this is 60 Minutes, don't quit, keep going." So eventually we finally make it up this mountain. And I was so relieved.

At the summit, they caught a breathtaking view of character.

[Devionne Johnson: I'm just really excited to be here and I really want you-- ya'll to know that I love all y'all. Y'all my brothers. ]

[Students: Bring it in!]

Edwin Leahy: Most of the problems in this country within urban America have nothing to do, and especially in schools, have nothing to do with intellect. A lot of it has to do with emotional noise that these kids suffer so it's a big challenge for us and to get the kids to realize their potential, the fact that they are a gift to somebody else. Not easy.

This is what he means.

[Student: My dad got locked up again...]

The key for a lot of the boys is intensive counseling, including group sessions, led by psychologist Ivan Lamourt.

[Student: As soon as I get angry people laugh - and I want to do is start slamming people.]

Ivan Lamourt: There's no way that I can expect a student to sit in a classroom and learn algebra or religion or any other subject when they're in extreme distress - when they're emotionally broken.

Scott Pelley: When you have a teenage boy, a problem by definition, but he has been hurt in his life, how do you get through?

Ivan Lamourt: All about connectedness. All about teaching that young man that we're not going anywhere because it's not us against them. It's US here, against THEM, out there.

Edwin Leahy: I tell people all the time I've seen dead people come to life, talk about resurrection. Guys who couldn't talk if you begin to get them to a point where they can work on it and talk about it takes a lot of time, grades will pop right up.

Scott Pelley: Who do you not reach?

Edwin Leahy: There's a lot of kids you don't reach.

Each year, about a dozen boys leave. But in a city where the high school drop out rate is about 30 percent, St. Benedict's is two percent.

Bruce Davis: One of the things we don't want to happen here is for us to to lose guys. That means we failed, like we failed them because we could not help them out to the point where they could stay.

Scott Pelley: Can't save everyone.

Bruce Davis: Not, you know everybody. But we try to save as many as possible.

Which brings us back to those exceptions to the entrance exam we mentioned. Andrew Brice, number 14 in the blue cap had wandered from family to foster home to the street. Two years ago, he was a stranger who snuck into water polo practice and asked for help.

Scott Pelley: When you went to the coach and said, "I have trouble at home, I've been sleeping on the street, I'm not making it in the school that I'm in, I want to come here," what did he say?

Andrew Brice: Monday you should be in school.

"Be here Monday." Turned out the coach was trained in lifesaving.

Andrew Brice: Oh, there were questions.

Andrew now lives on the monastery grounds, one of six students who have nowhere else to go. He hopes to make his way as a professional dancer. And from the looks of it, he's off on the right foot.

Scott Pelley: He came here off a hard road.

Bruce Davis: Yeah. It's been hard. He's not a quitter, you know. And that's another motto. Benedict's hates a quitter.

On graduation day, another class of seniors had willed each other up the mountain.

And their last chant of St. Benedict's morning affirmation was shouted like prophesy.

Recruiting for talent on the autism spectrum