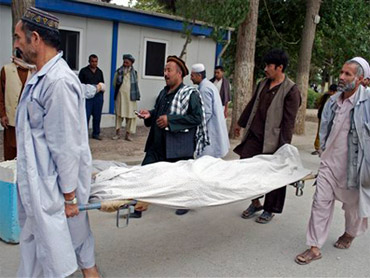 Meanwhile, insurgents wearing suicide vests tried to storm NATO's largest base in the south, but did not breach its defenses, officials said.

Alhaj Zaher Vahdat, deputy governor of Balkh province, said one person has been arrested in connection with the robbery Monday night at a branch of Kabul Bank in the northern city of Mazar-e-Sharif.

Sherjan Durani, a police spokesman for Balkh province, said someone apparently mixed the poison into the guards' food. The guards showed evidence of having vomited, he said. The robbers used small and large knives to stab the guards in the neck, stomach and heart, then fled with about $269,000 in U.S. and Afghan currency. Earlier reports that the guards had been beheaded are inaccurate, Durani said.

Kabul Bank officials declined to comment on the incident until it has been investigated.

The assault on Kandahar Air Field started just before midday Tuesday with two rockets fired into the base, then a handful of would-be suicide bombers assaulted the outer gates, said Commander Amanda Peterseim, a spokeswoman for NATO forces.

She said there had been no reports of NATO casualties, and that all of the attackers were killed in the fighting. Peterseim said there were "approximately four" people in suicide vests.

"They either detonated themselves or were killed," Peterseim said.

The Taliban claimed responsibility for the attack, saying they sent seven suicide bombers to assault the base. At least one of the bombers detonated his explosives at a base checkpoint, said Qari Yousef Ahmadi, a spokesman for the insurgent group.

Kandahar provincial government spokesman Zalmai Ayubi said two civilians who were outside the base were injured in the fighting.

Taliban insurgents previously tried to storm the Kandahar base on May 22, just a few days after the insurgents sent suicide bombers to assault the main U.S. base in the country — Bagram Air Field near the capital.

In Kabul, meanwhile, a task force set up to tackle corruption announced the conviction Tuesday of a regional police commander alleged to have taken thousands of dollars in bribes from drug runners across his five-province command.

Maj. Gen. Malham Khan was convicted of abusing his authority after a one-day trial, according to a statement by the Criminal Justice Task Force. He was sentenced to 10 years in prison and fined $14,000.

Khan was found to have taken $7,000 in bribes in the past four months to allow drug traffickers to smuggle opium and other drugs into Turkmenistan and India, said Khalilu Rahman Motawakel, a spokesman for the task force.

Two of the police officers under his command testified against Khan in exchange for reduced prison terms of two-and-a-half years each, Motawakel said.

Khan had said he was innocent of all charges. His lawyer could not be immediately reached for comment.

Both the defense and the prosecution plan to appeal, Motawakel said. The prosecuting lawyers are hoping for a stiffer penalty, alleging that Khan had in fact received tens of thousands of dollars in bribes, he said.

The Afghan government has pledged to clean up endemic corruption across its ministries and security forces after heavy criticism from Western countries, particularly the U.S., that are propping up the government with tens of thousands of troops to fight the Taliban.