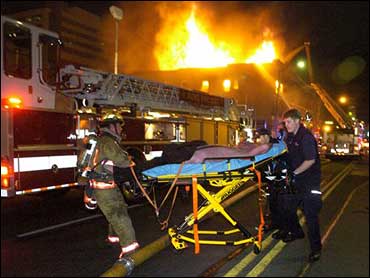 A woman was arrested Wednesday on arson and murder charges after a fire swept through a three-story hotel in Reno's downtown casino district, killing six people and injuring dozens of others.

Police Chief Michael Poehlman said the 47-year-old woman set fire to a mattress in her room at the Mizpah Hotel. Officials were still trying to determine a motive.

The first victim was found about 90 minutes after the fire was reported, shortly after 10 p.m. Tuesday, Fire Chief Paul Wagner said.

The first person had made it out of the hotel during the fire and died, and then in the course of battling the blaze, investigators from search-and-rescue crews went inside the hotel and discovered five other people were burned in the north end of the building, KTVN's Tom Henkenius reports.

More victims could still be in the rubble of the historic hotel, Wagner said.

Police estimated that when the fire started, 60 to 80 people were inside the 84-year-old brick building, a primarily residential hotel that had been recently renovated.

Watch RAW video of the blaze and rescue effort.

The blaze quickly engulfed the hotel's north wing, which covers most of a city block just east of Harrah's. None of the downtown high-rise hotel-casinos was threatened, Poehlman said.

A few residents jumped to safety from windows as the hotel burned. Others were rescued by firefighters with ladders and city workers who were in the area with a cherry picker. About 30 people were injured, some from jumping.

The building's roof collapsed in the blaze.

Third-floor resident John Hicks said he saw one person jump from a window and land on a metal trash bin.

"I lost my clothes, I lost everything. It spread so fast I could have died," Hicks told the Reno Gazette-Journal. "The flames were getting into my room. I'm lucky to be alive."

The Mizpah was built in 1922 and added to the National Register of Historic Places in 1984.

"It was just gorgeous, and now it's all gone," said general manager Sharon Steele.

Fire Department spokesman Steve Frady said the hotel was equipped with smoke alarms but did not have sprinklers, which was allowed by city code because of the building's age.