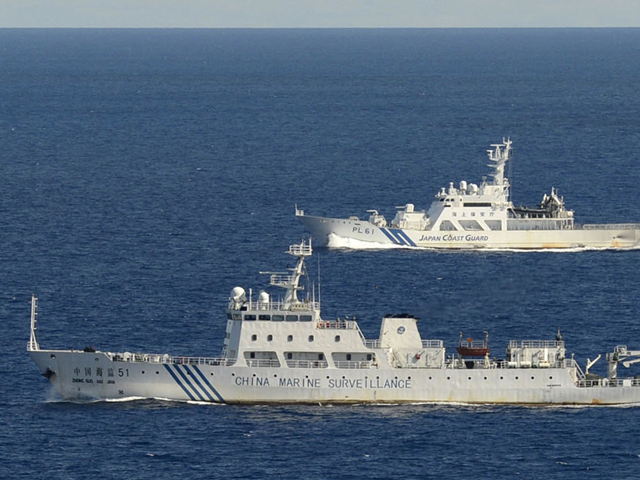 After Japanese coast guard ships telegraphed warnings to the Chinese vessels, two or three moved beyond territorial waters but the others remained within the 12 nautical mile zone around the uninhabited islands that are controlled by Japan but claimed by both nations, said Yasuhiko Oku, an official with the Japanese coast guard in Tokyo.

It was the first intrusion by Chinese vessels into what Japan says are its waters since Tokyo bought the islands from their private Japanese owners this week. The islands, called Senkaku by Japan and Diaoyu by China, are surrounding by rich fishing grounds and are near key shipping lanes.

Anti-Japanese protests have since been held in various Chinese cities, and some Chinese have called for a boycott of Japanese goods.

The Chinese Foreign Ministry confirmed that six surveillance ships had entered waters near the islands, which are also claimed by Taiwan, and began "patrol and law enforcement" there.

"These law enforcement and patrol activities are aimed to demonstrate China's jurisdiction over the Diaoyu Islands and its affiliated islets and ensure the country's maritime interests," the statement said.

Earlier this week, the official Xinhua News Agency said that China sent two ships to the islands after Japan announced the purchase.

Tensions between the two nations have flared since Tokyo's nationalistic governor, Shintaro Ishihara, in April proposed buying and developing the islands so that they wouldn't fall into Chinese hands. Activists from both sides landed on the islands in August.

To block Ishihara's plan, which would likely infuriate China, Prime Minister Yoshihiko Noda's government was left with little choice but to buy the islands. The government doesn't plan to develop them, but the move still angered China, which warned of "serious consequences."