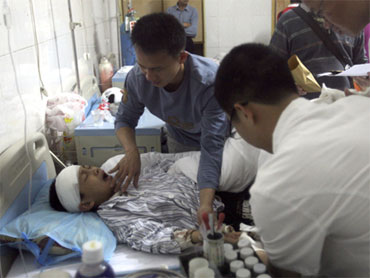 A farmer attacked and injured five kindergarten students with a hammer in eastern China before burning himself to death Friday in the latest in a string of horrific assaults on children at Chinese schools, state media reported.

The attacker used a motorcycle to break down a gate of the school in Shandong province's Weifang city, struck a teacher who tried to block him and then used the hammer to attack the children, the official Xinhua News Agency said.

The assailant then grabbed two children before pouring gasoline over his body and lighting himself on fire, but teachers at the Shangzhuang Primary School were able to pull the children away to safety, Xinhua said. The man died, but none of the children had life-threatening injuries, Xinhua said.

Xinhua identified the attacker as Wang Yonglai, a local farmer, but had no further details. A staffer from the Weifang Public Security news office, who only gave his surname Ma, confirmed the incident.

China has been reeling from a series of attacks on schoolchildren, with the latest incident coming just a day after a 47-year-old unemployed man rampaged through a kindergarten in Taixing city in neighboring Jiangsu province, wounding 29 students aged 4 or 5 years old, five of them seriously.

Friday's attack was the third on schoolchildren in three days, and the fifth incident in just over a month.

Experts have said the attacks are possible copycat rampages triggered by similar incidents Wednesday and last month. The wave of school attacks falls amid poor care for the mentally unstable and growing feelings of social injustice in the fast-changing country.

The attacker in Taixing, identified as Xu Yuyuan, pushed his way into a classroom Thursday with an eight-inch knife after two teachers and a security guard failed to stop him. No motive has been given.

Most of the recent school invasions have been blamed on people with personal grudges or suffering from mental illness, leading to calls for improved security.

Hatton reports that schools across the vast country have beefed up security out of fear of further copycat attacks, with some already moving to arm their guards with batons, pepper spray and long metal poles.

The state-controlled media have given little prominence to the attacks, favoring instead coverage of the soon-to-kick off World Expo.

"I would imagine that there is a kind of a standing order when it comes to crimes like this that they should not be emphasized or given too much prominence," Jeremy Goldkorn, founder of media website Danwei.org told CBS News.

In Beijing's Xicheng district, all kindergarten, elementary and middle schools in the area were armed with "police restraint sticks," long-handled poles with a hook on the end, the Beijing Youth Daily reported Friday.

Starting Saturday, school security guards in one district in southern Nanjing City will be given police batons and pepper spray to help them guard campuses. The 70 full-time security guards will be monitoring kindergartens, elementary schools and middle schools, the China News Service reported.

In eastern Jinan city, police posts are being built on elementary and middle schools campuses to ensure security.

Accounts in China's state media have glossed over motives and largely shied away from why schools have so often been targets. Yet experts say outbursts against the defenseless are frequently due to social pressures. An egalitarian society only a generation ago, China's headlong rush to prosperity has sharpened differences between the rich and poor, and the public health system has atrophied even as pressures grew.

China likely has about 173 million adults with mental health disorders, and 158 million of them have never had professional help, according to a mental health survey in four provinces jointly done by Chinese and U.S. doctors that was published in the medical journal The Lancet in June.

In an editorial Friday, the English-language China Daily said that security should be tightened at all schools nationwide, but urged that efforts focus on preventing the attacks from happening in the first place.

"It can be easy to put killers on trial and execute them but it is far more difficult to find out the deep-seated causes behind such horrifying acts. Our efforts should be focused on preventing these from happening," it said. "We should find out what propelled them to such extremes. What problems do they have? Could anyone have helped, especially the authorities?"

On Wednesday, a man in the southern city of Leizhou broke into a primary school and wounded 15 students and a teacher in a knife attack. The suspect, Chen Kangbing, 33, was a former teacher who had been on sick leave since 2006 for mental health problems. The assault left fourth and fifth graders with stab wounds on their heads, backs and arms, but none was in life-threatening condition.

That attack came the same day a man was executed for stabbing eight children to death outside an elementary school last month in the southeastern city of Nanping.

The attack in March shocked China because eight children died and the assailant had no known history of mental illness. At his trial, Zheng Minsheng, 42, said he killed because he had been upset after being jilted by a woman and treated badly by her wealthy family. He was executed Wednesday, just a little over a month after his crime.

After a 2004 attack at a school in Beijing that left nine students dead, the central government ordered tighter school security nationwide. Regulations that took effect in 2006 require schools to register or inspect visitors and keep out people who have no reason to come inside.