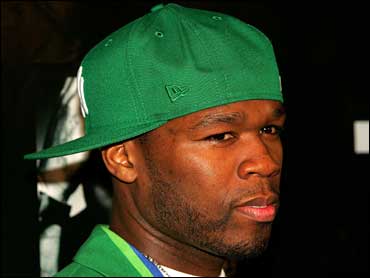 When 50 Cent bought Mike Tyson's 48,000-square-foot mansion three years ago, the rapper felt like he'd stepped into a time warp. "It kind of had a `Miami Vice' feel. It was like turquoise blue on the floor and purple," the 31-year-old rapper told The Associated Press in a recent interview. "It was crazy looking when I got there."

Now, 50's stamp is imprinted all over the massive 19-bedroom property in Farmington, Conn. The mansion now includes a nightclub with a swing dangling from the ceiling for some of his wilder parties.

But those touches may not remain. 50 is selling the property for $18.5 million. And Thursday, he's showing off the property on a special edition of MTV's "Cribs" so fans can take a peek before he moves out.

"I like the look of an Architectural Digest," 50 said of his designing style. "There's a lot of good living going on, and it ain't based (on) the actual money that's being spent, it's the choices that people make. You don't have to buy a $50 million home to build a lifestyle that's equivalent."

Of course, that's coming from a man with a house so big there are times he has guests and doesn't even know it.

"I'll let them stay on the other side of the house and not actually see them for a day or so, because the house is broken up in three sections - the east side, the west side and then the center of the home."

The space is one reason why 50 purchased the property. He envisioned it as a compound where he and his G-Unit camp could record. Some rappers in his camp, like Tony Yayo, have their own rooms, and 50 says many of his hits have been recorded in his basement studio.

"Right from the studio I will go into the nightclub area ... in order to play it and see what it would sound like in a nightclub," he said.

But 50, who owns several homes, said he's grown weary of the two-hour plus commute from Farmington to New York. Plus, he's looking to downsize.

"It might be a lot smaller," he said of his future house. "The basics - maybe four or five bedrooms."

But don't expect another 50 edition of "Cribs" for a while: When asked whether he'd let the cameras into his next place, he said with a laugh: "Probably when I was deciding to move!"