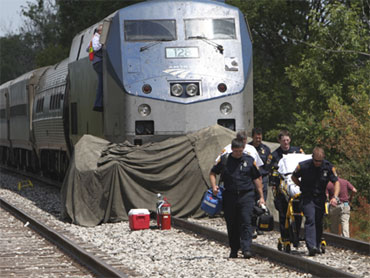 An Amtrak passenger train carrying about 170 people struck a car at a road crossing near Detroit on Thursday, killing all five people in the sedan, authorities said.

The crossing has a gate and flashing lights that were believed to be working when the car approached, said Gajeski, a police spokesman. Based on witness accounts, police suspect the people in the sedan tried to go around the gate and were hit, he said.

"It looks like they probably did go around the arm. They went around the gate," Gajeski said.

The bodies remained in the black Ford more than three hours after the crash while the investigation was ongoing, Gajeski said. He said the train typically travels about 67 miles per hour at the site.

The crash occurred around 12:30 p.m. in the Wayne County community of Canton Township, about 20 miles west of Detroit, said police Sgt. Craig Wilsher. Wilsher said the vehicle was heading north when it crossed the train tracks and was hit. Gajeski said the car was pushed about a mile from one road crossing to another.

The only reported medical problem among the approximately 170 people on the train was a case of a passenger with asthma, he said.

The train was headed from Detroit to Chicago, said Marc Magliari, a Chicago-based Amtrak spokesman.

"There is every indication the train crew was doing exactly what it should have been doing and that there was no malfunction of the train," he said. "They can't make vehicles, or pedestrians for that matter, heed signals."

"This is tragic for both the family of those who died and the train crew," he said.

Around 3:40 p.m., the five passenger cars and rear engine of Amtrak train 353 pulled away from the engine involved in the crash. The front engine was to remain at the scene during the investigation while the rest of the train returned to the Dearborn station.

Buses will take the passengers to the Ann Arbor station, where they will catch a later train to Chicago, Magliari said. While the passengers waited to leave, the rear engine of the train was kept running so the air conditioning and bathrooms worked.

The train - which has a front and rear engine and five passenger cars - was stopped near a landfill and a wooded area. The mangled sedan was pushed against the front of the train and investigators covered it with greenish-gray tarp.

There is a warning device with a flashing light and gates at the crossing where the crash occurred, said Rudy Husband, a spokesman for Norfolk Southern Corp., which owns the track. Husband said he couldn't say if the device was working at the time of the crash. That will be part of the investigation, he said.

Last year, 119 people died in Amtrak accidents, usually when trains struck vehicles or pedestrians at railroad crossings, according to figures from the Federal Railroad Administration.

The National Transportation Safety Board hasn't yet decided whether to investigate the crash, spokesman Keith Holloway said.

"Preliminary information indicates that there was no derailment, there were no fatalities on board the Amtrak" train, he said. "We don't always investigate grade-crossing accidents."

Jennifer Talley was one of about 30 passengers waiting at the Ann Arbor station to board the train involved in the crash.

Around 12:30 p.m., when the train was supposed to pull in, "they announced there was going to be a delay and they didn't know how long it would be, and it was right after that they told us it was an accident," said Talley, 36, a librarian at the University of Michigan in Ann Arbor who was headed to Chicago.

The waiting passengers, including Talley, boarded another train about two hours later, she said.