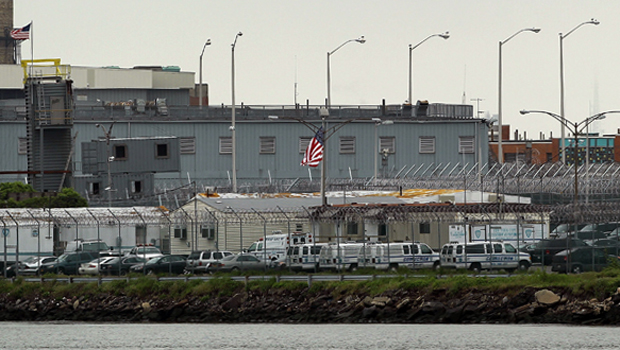 NEW YORK -- A former chief at New York's notorious Rikers Island jail complex and four of his underlings were convicted of felony charges Tuesday after authorities said they beat an inmate at the chief's behest because the man had stared him down during a search of his cell.

Former Assistant Chief for Security Eliseo Perez and the four officers were convicted Tuesday of attempted gang assault and other charges in connection with the June 11, 2012 attack on inmate Jahmal Lightfoot.

Perez retired from his position in 2013. The officers -- Alfred Rivera, Tobias Parker, Jose Parra and David Rodriguez -- remain on modified duty Tuesday, officials said. A sixth officer, Jeffrey Richard, who prosecutors had alleged aided in covering up the attack, was found not guilty.

Prosecutors said the altercation with Lightfoot started when the officers conducted a contraband search - patting down inmates, tossing over mattresses and rifling around cells for any prohibited items. They said that during the search, Lightfoot locked eyes with Perez. Angered by the stare-down, Perez shouted out to a captain and five officers that Lightfoot "thinks he's tough" and should be beaten, prosecutors said.

Authorities said the guards led Lightfoot into a small cell and then pummeled him so severely he had two fractured eye sockets, a broken nose and bruises that left his eyes swollen shut. Prosecutors also alleged the officers filed false reports claiming Lightfoot had slashed an officer with a sharpened piece of metal, in an effort to explain Lightfoot's injuries.

The judge presiding over the case signed a gag order in February prohibiting lawyers in the case from commenting.

In a statement Tuesday, Norman Seabrook, president of the union that represents rank-and-file correction officers, said the verdict is unfair and unjust.

"Today's verdict is an absolute travesty and yet another example of how Correction Officers are treated differently and disrespected for doing the job they are sworn to do -- protect New Yorkers," he said.

New York City Correction Commissioner Joseph Ponte said he had "zero tolerance for any illegal behavior on the part of staff" and that officers convicted of felonies would be terminated. He said he's confident the department is taking the right step toward reforming Rikers.

The trial came just weeks after New York lawmakers called for the closure of the notorious jail complex. New York City Mayor Bill de Blasio, a Democrat, has said those calls are "noble" but that the proposal raises major financial and logistical issues.

Located in the middle of the East River, Rikers holds about 10,000 inmates.

Concerned by a number of inmate deaths and a stream of alarming reports about Rikers, Preet Bharara, the U.S. attorney for the Southern District of New York, launched a two-year investigation into the jail complex.

"We found in an alarming number of cases there was no discipline with respect to officers at all," Bharara told "60 Minutes" correspondent Bill Whitaker in April. "You had an officer who had dozens of complaints against him and was never disciplined once, or maybe just one time, and that's something that has to change. People have to understand that there are consequences for their actions, not just the inmates, but the officers as well."

The city recently initiated a number of policy changes, like installing more cameras and reducing the use of solitary confinement. A federal monitor was appointed to insure the reforms are implemented.