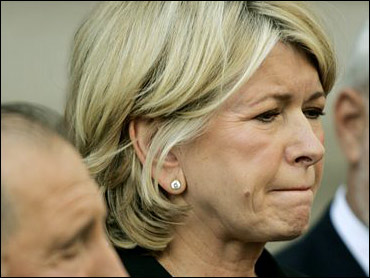 Choking back tears and pleading for leniency, celebrity homemaker Martha Stewart was sentenced to five months in prison Friday for lying about a stock sale. But the woman who saw her gracious homemaking empire crippled over a single transaction smiled boldly into the cameras outside to denounce her treatment, pitch her company and vow: "I'll be back."

Stewart, who was also ordered to spend five months confined to her home and fined $30,000, was allowed to remain free pending appeal. The sentence was the minimum possible under federal guidelines.

Peter Bacanovic, the high-powered stockbroker who was convicted along with Stewart of lying about her stock sale in December 2001, received the same sentence of five months in prison and five months home confinement. He was fined $4,000.

While Stewart did not admit guilt in court — a move that could have jeopardized her appeal — she took pains to tell U.S. District Judge Miriam Goldman Cedarbaum she was sorry that others had been hurt by the scandal.

"What was a small personal matter became over the last two and a half years an almost fatal circus event of unprecedented proportions spreading like oil over a vast landscape, even around the world," Stewart said.

Cedarbaum accepted a defense request to recommend to federal prison officials that Stewart serve her time at a minimum-security facility in Danbury, Connecticut, close to her home in Westport.

"Even though Cedarbaum gave Stewart prison time, she didn't give her the maximum 16 months possible under the federal sentencing guidelines," CBS News Legal Analyst Andrew Cohen. "Instead, she gave her near the minimum sentence possible while still ensuring some hard prison time. And even though Cedarbaum remains convinced that Stewart was fairly tried and convicted by overwhelming evidence, she was willing and able to recognize that Stewart has 'suffered, and will continue to suffer, enough.'"

Cedarbaum allowed Stewart to postpone the sentence while her lawyers appeal her conviction — a process that could take months, and that legal experts have called an uphill battle.

Just before she was sentenced, Stewart — who during her trial spoke only to declare her innocence — rose from her seat and, her voice breaking almost to the point of sobs, told the judge she feared her life would be "completely destroyed."

Then, in an extraordinary change of demeanor, Stewart walked down the courthouse steps, approached a microphone and denounced the scandal as full of "such venom and such gore — I mean it's just terrible."

Smiling and showing her well-honed comfort with TV cameras, she even suggested fans could "continue to show your support" by subscribing to her magazines and buying her line of homemaking products.

And she vowed: "I'll be back. I will be back. Whatever I have to do in the next few months, I hope the months go by quickly. I'm used to all kinds of hard work, as you know, and I'm not afraid."

Stewart resigned as CEO of the company when she was indicted last year and gave up her seat on the board after she was convicted. She remains its leading creative force and holds the title of founding editorial director.

The prison sentence punctuated a chain of events that began on Dec. 27, 2001, when Stewart, in a brief phone call from a Texas tarmac on her way to a Mexican vacation, sold 3,928 shares of ImClone Systems Inc., a biotechnology company run by her longtime friend Sam Waksal.

Prosecutors alleged that Bacanovic, now 42, ordered his assistant to tip Stewart that Waksal was trying to sell his shares. ImClone announced negative news the next day that sent the stock plunging. Stewart saved $51,000.

Stewart and Bacanovic always maintained she sold because of a preset plan to unload the stock when it fell to $60.

The star witness against Stewart was Douglas Faneuil, a young former brokerage assistant who vividly described Bacanovic's order when he learned Waksal was trying to sell: "Oh my God. Get Martha on the phone."

But the verdict on March 5 — guilty on four counts apiece for Stewart and Bacanovic — set off a string of events nearly as dramatic as the trial itself.

In April, lawyers for both defendants accused one juror of lying about an arrest record in order to get on the trial. Cedarbaum denied a request for a new trial, saying there was no proof the juror lied or was biased.

And in May, federal prosecutors accused Larry F. Stewart, a Secret Service ink expert, of lying repeatedly in his testimony at the trial — mostly about the role he played in ink-analysis testing of a stock worksheet.

The juror issue and the perjury charges against Larry Stewart, no relation to Martha Stewart, are expected to form the basis of Martha Stewart's appeal.

The U.S. Bureau of Prisons will determine in which prison Stewart does her time, most likely a women's facility in Danbury, Conn., or Alderson, West Virginia.

"I think it'll be terrible for her," he says. "I think it's going be a crushing experience. When you're that powerful, that wealthy, that used to having your way in all things, one of the things you discover in prison is that you have absolutely no control over almost every aspect of your life."