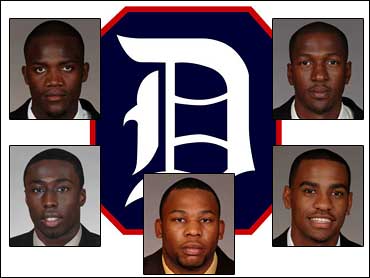 Pittsburgh police have been searching for the gunman since the shootings occurred about 2:15 a.m. as several players returned from an on-campus dance at the student union.

Authorities said two players were walking near Vickroy Hall when they encountered a man who apparently had been disruptive at the dance attended by about 200 people. The players tried to calm the man and began walking away, but were shot, police said. Players who rushed to their aid were also shot.

Those most badly injured were 6-foot-7 forward Sam Ashaolu, a transfer from Lake Region State College and a cousin of former Houston Rockets star Hakeem Olajuwon, and Stuard Baldonado, a 6-7 transfer from Miami Dade College who was considered the Dukes' best recruit.

Also hospitalized is Kojo Mensah, a guard from Brooklyn, N.Y., who averaged nearly 17 points last season at Siena before transferring, school officials said at a news conference Sunday. His condition was not immediately available.

Treated and released from Mercy Hospital were 6-10 Shawn James, the nation's leading shot blocker last season at Northeastern University before transferring to Duquesne, and Aaron Jackson, a guard who is one of only two returning players from Duquesne's 3-24 team of last season.

University president Charles Dougherty said witnesses reported seeing two guns, but he couldn't confirm if both were fired. The second gun was seen on someone in a group with the shooter; no one in the group was a Duquesne student, Dougherty said.

Between six and 12 shots were fired, he added.

James, expected to be Duquesne's top player when he becomes eligible in the 2007-08 season and an NBA prospect, was shot in the foot but no bones were broken. Mensah was believed to have been shot in the shoulder. Jackson was shot in the hand.

"The entire Duquesne University community is saddened and shocked," Dougherty said. "We're shocked because an event of this sort has never happened. It's a safe campus and known to be a safe campus."

The downtown school has round-the-clock police protection, which was stepped up Sunday. Armed university police officers guarded dormitories and other buildings.

Matt Tripodi, 18, of Rochester, N.Y., a business and accounting major at Duquesne, said the shooting could spoil the university's reputation as a safe place.

"It's the safest campus and now it's not," he said, though he added he wasn't worried about his safety.

Athletic director Greg Amodio said officials have not yet considered the effect the shooting will have on the basketball program because the school is primarily concerned about the students.

New Duquesne coach Ron Everhart, formerly at Northeastern, had rebuilt the Duquesne program almost from scratch after being hired in March by bringing in 10 recruits — one of the most sweeping upheavals of any Division I program in recent years.

The university postponed a women's soccer game scheduled for Sunday and barred all media from the campus.

"We are concerned about the psychological impact of this on our students," Dougherty said.

Several students who were distraught after witnessing the shootings were being counseled Sunday.