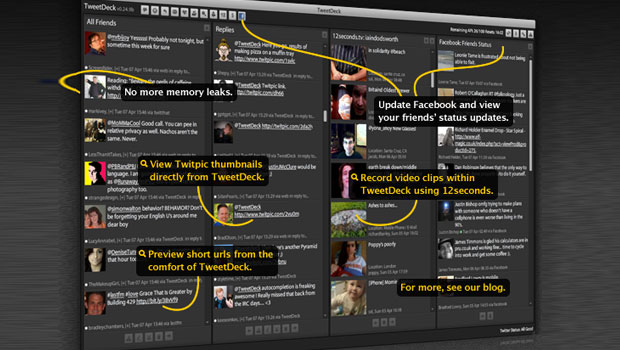 (CBS) - In recent events, microblogging site Twitter and third-party service TweetDeck (which contributed to Twitter's traffic decline) joined forces. It was a smart move for Twitter -- TweetDeck's got a lot of fans, including us!

The app, which is available on desktops, iPhones and iPads, helps us sound as smart as we really are, be as lazy as we'd like to be, keep up-to-date, watch our stalkers across multiple platforms and function at work. What's not to love?

We don't have to be succinct. We can be longwinded, wordy and even more self-indulgent than usual.

Sometimes, we've got a lot to say, and don't want say it using slangs and symbols -- "where U B @ girl" comes to mind. (Cringe.) We want to get our points across in an intelligent fashion, you know? TweetDeck can bypass the pesky 140-character limit and send longer messages to your Twitter followers using their new Deck.ly service.

On TweetDeck, you can update your Twitter, Facebook, MySpace (if you still have one, that is), LinkedIn, Google Buzz and Foursquare. It's all on one desktop -- so no more having multiple tabs open, cutting and pasting status updates, and your head spinning.

We like to work and play at the same time.

We're lazy. We don't want to have to click the back button.

Don't you hate it when you have to open yet another tab or window just to watch a video one of your friends is sharing? Then you have to close said window after watching or hit the back button -- it's sooo draining. Ugh. Luckily, with TweetDeck, you can watch the clip right in the same browser. Plus, you can also record and share clips using TwitVid. There's also a similar functionality for photos if you have Flickr, Twitgoo or mobypicture.

We want to keep a close eye on our stalkers.

Like we said, we're really just that cool. It's hard to keep up with all of our social networks, not to mention the people that adore us. We need something like TweetDeck to keep all our stalkers in check -- the service helps manage our @ replies and conversations with followers; add, create and manage Twitter lists; and see who's following us.