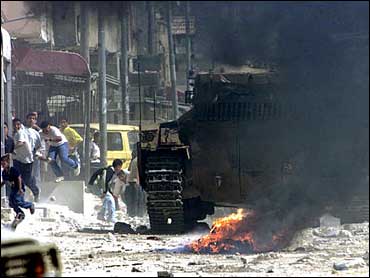 In the fourth Hamas suicide attack in two days, a Palestinian riding a bicycle detonated a bomb near an Israeli jeep in the Gaza Strip on Monday, killing himself and lightly injuring three soldiers.

The spate of bombings by the Islamic militant group underscored how difficult it will be to carry out the U.S.-backed "road map" plan, a three-stage prescription for ending violence immediately and setting up a Palestinian state by 2005.

Israeli Prime Minister Ariel Sharon was to have discussed the plan with President Bush at the White House this week, but canceled his trip after Sunday's bus bombing. The Palestinians have accepted the plan as is.

Hamas said Monday it has no intention of halting attacks, despite Egypt's ongoing efforts to have Palestinian militant groups agree to a one-year suspension of shootings and bombings. The armed groups have said they might agree to a truce if Israel promises to stop hunting militants - a proposal Sharon has turned down.

Instead, Israel reaffirmed there will be no letup in its campaign against those involved in violence. Israel "will continue to fight terror everywhere, at any time and in any way possible," a Cabinet statement said Sunday, after a Hamas suicide bomber killed seven Israelis on a Jerusalem bus earlier in the day.

The Cabinet also decided to isolate Yasser Arafat further, saying Israeli officials would not meet with foreign officials who also want to see the Palestinian leader. Arafat has been confined by Israel to the West Bank town of Ramallah for more than a year.

The new Palestinian prime minister, Mahmoud Abbas, has denounced violence against Israelis, but also told Sharon in a weekend meeting - the first Israeli-Palestinian summit in three years - that he wants to persuade the militants to stop attacks, rather than disarm them by force.

The argument over how rein in the militants and halt violence has been holding up implementation of the road map. The plan calls for parallel steps in the first stage, including a Palestinian crackdown on militants, an Israeli troop pullback from Palestinian towns and a construction freeze in Jewish settlements.

However, Sharon has expressed major reservations, insisting the Palestinians make the first move.

In Monday's bombing, a 19-year-old Palestinian rode a bicycle toward an Israeli army jeep near the Jewish settlement of Kfar Darom in Gaza. When he got close, he detonated a 66-pound bomb strapped to his body, said Col. Avi Ashkenazi, an Israeli commander in the area. Hamas sources identified the bomber as Shadi Nabaheen from the nearby Bureij refugee camp.

About an hour after the bombing, Palestinians fired on an Israeli convoy of civilian cars escorted by jeeps near the Jewish settlement of Netzarim. There were no injuries, but the bus was damaged, the army said.

The latest wave of attacks began Saturday evening when a Hamas bomber blew himself up in a square in the West Bank city of Hebron, killing an Israeli settler and his pregnant wife. On Sunday morning, another Hamas assailant blew up the Jerusalem bus and about half an hour later, a third bomber from the group detonated explosives on the outskirts of Jerusalem, killing only himself.

The three bombers came from Hebron and at one point studied at the Polytechnic Institute in the city. Two bombers, Fuad Qawasmeh, 18, and Bassem Takrouri, 19, lived in the same Hebron neighborhood and were friends. The Israeli military on Monday demolished the Qawasmeh family home, part of a policy of trying to deter attacks by punishing assailants' relatives.

The three bombers released farewell videos, apparently taken in the same wooded area. In frame grabs published in the Yediot Ahronot daily, the three struck identical poses, holding up assault rifles. Each wore a green headband with Quranic verses and an olive-colored vest with pockets for ammunition and grenades.

A Hamas leader, Abdel Aziz Rantisi, said Monday that "legitimate resistance will continue as long as occupation exists on our holy land."

Asked whether Hamas was challenging Abbas, Rantisi said only that there was no point in trying to negotiate with Sharon, whom he called a "terrorist."

Hamas has carried out most of the 94 suicide bombings that have killed more than 300 Israelis in the past 32 months of fighting.

Even so, Israel routinely holds Arafat responsible for the attacks, saying he encourages such violence. Several Israeli Cabinet ministers renewed calls for Arafat's expulsion, but Sharon said this was not the time to expel Arafat.

Sharon said deporting Arafat would create a worse situation for Israel than the present one, according to a senior Israeli government official who spoke on condition of anonymity.

Instead, Israel took a much lesser measure, aiming to increase his isolation. The official said foreign diplomats would be told that if they declare their intention to meet Arafat, they will be banned from seeing Israeli officials.

Israeli also put a tight closure on the West Bank, banning Palestinians from entering Israel. However, the measure made little practical difference, since Israel has been enforcing stringent travel bans since the outbreak of fighting.

In Washington, Secretary of State Colin Powell urged Palestinians "to begin to take immediate and decisive action to eradicate the infrastructure of terrorism and violence."