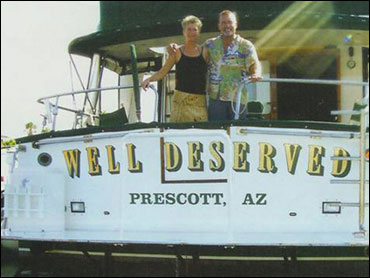 (Family Photo)
Tom and Jackie Hawks on the Well Deserved

A couple's dream yacht that ultimately cost them their lives is up for sale.

It was in Newport Beach, Calif. that Tom and Jackie Hawks came to find paradise. Their dream was rooted in two simple things: being together and being on a boat. Few people had lived better lives, so it almost seemed like fate when the couple bought a 55-foot yacht that was already named Well Deserved. For Tom and Jackie, a dream had come true. Life was an endless cruise filled with good times and best friends, sailing from Catalina Island to Mexico's Sea of Cortez.

"He said, 'Life's too short, and it's my life, this is our time, and I feel if I hesitate, then it would just go by and I'll miss it,'" says Ryan Hawks, one of the couple's sons. 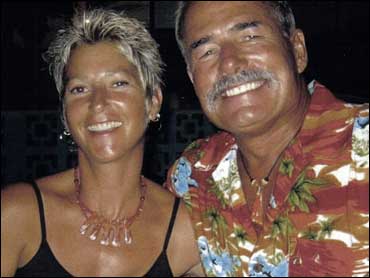 While Tom and Jackie were living the life they'd always dreamed of, something wonderful was happening in the mountains of Prescott, Ariz., that would alter their lives forever: Tom's son, Matt and his wife, Nicole, welcomed a baby. "They were just very excited," Matt says. "Jackie was already buying baby clothes."

After four years at sea, Tom and Jackie decided To return to Arizona when their first granchild was born to son Matt and his wife Nicole. They put their boat up for sale... And one of the potential buyers would alter the course of the family's life forever.

Skylar Deleon, a former child actor, whose latest line of work was burglary, hatched a twisted plot with his young wife to kill the Hawks, sell the boat, drain their accounts and be set financially for life. Deleon and two accomplices got the Hawks to take them on a test cruise of Catalina Island into the Pacific. The trio overpowered the unsuspecting Hawks, forcing them to sign over the boat and their bank account information. Deleon and the two others tied Tom and Jackie Hawks to the anchor then throwing them overboard of Newport Beach.

Their bodies have not been found. 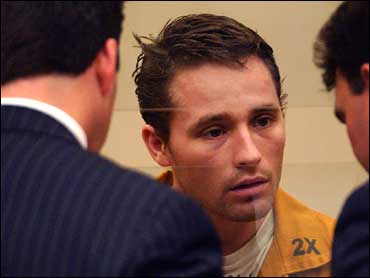 Skylar Deleon, his former wife Jennifer Henderson and John Kenned have been convicted of charges relating to the murder of Tom and Jackie Hawks. The fifth conspirator, Alonso Machain pled guilty to voluntary manslaughter. Investigators had kept the yacht Well Deserved in dry storage for the past four years as evidence after the 2002 murders.

The sons of Jackie and Tom Hawks say they're ready to sell the boat now that the criminal proceedings are over.

Watch The 48 Hours Broadcast On The Hawk Case