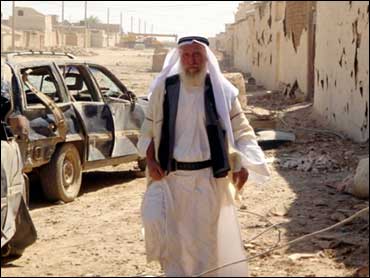 The Interior Ministry said Thursday that at least 400 people were killed in a string of suicide bombings targeting an ancient religious sect in northwestern Iraq earlier this week.

Ministry spokesman Brig. Gen. Abdul-Karim Khalaf said that 2 tons of explosives were used in the blasts, which crumbled buildings, trapping entire families beneath mud bricks and other wreckage as entire neighborhoods were flattened near the Syrian border.

The victims were Yazidis, a small Kurdish-speaking sect that has been targeted by Muslim extremists who consider its members to be blasphemers.

Khalaf said 400 people were killed. Local officials earlier had given estimated death tolls ranging from 250 to 500 as bodies were pulled from the rubble and hundreds of wounded were taken to several overwhelmed hospitals across the region.

As emergency crews and bewildered residents sifted through the rubble of leveled clay houses in the northwest, a car bomb ripped through a Baghdad market district during the morning rush hour, killing at least nine people and wounding 17 more.

A police officer says the car was parked in a seven-story building on top of a row of stores and touched off a huge fire. There's been no claim of responsibility for the attack but it comes as U.S. commanders warn of more insurgent attacks ahead of next month's report to Congress on the progress on the war.

Meanwhile, the Iraqi prime minister and president announced Thursday a new alliance of moderate Shiites and Kurds, saying Sunni moderates refused to join but the door remained open to them.

Prime Minister Nouri al-Maliki said the agreement was the first step to unblock political stagnation that has gripped his Shiite-led government since it first took power in May 2006.

The announcement after three days of intense political negotiations in the capital was disappointing because it did not include Iraq's Sunni Vice President Tariq al-Hashemi and his moderate Iraqi Islamic Party.

President Jalal Talabani, a Kurd, said al-Hashemi refused the invitation to join in the new political grouping but "we have not closed the door to him."

An American commander called the attack on the Yazidi community in the northwest an "act of ethnic cleansing," and the military blamed the suicide attack on al Qaeda in Iraq.

"This is an act of ethnic cleansing, if you will, almost genocide," Army Maj. Gen. Benjamin Mixon, commander of U.S. forces in northern Iraq, told CNN. He said that was evident from the fact Yazidis live in a remote part of Ninevah province that has been far from Iraq's conflict.

The attack comes just as the American military is claiming the troop surge is making real progress, particularly against al Qaeda, reports CBS News national security correspondent David Martin. But al Qaeda still has the capability to hit where the American troops are not.

"What it tells me is they have to move to the remote areas to conduct their murderous acts," says Mixon.

Mixon said last month that he proposed reducing American troop levels in Ninevah and predicted the province would shift to Iraqi government control as early as this month. It was unclear whether that projection would hold after Tuesday's staggering casualties.

U.S. commander, Gen. David Petraeus said Wednesday he was preparing recommendations on troop cuts before he returns to Washington next month for a report to Congress, and believes the U.S. footprint in Iraq will have to be "a good bit smaller" by next summer. But Petraeus cautioned against a quick or significant U.S. withdrawal that could surrender "the gains we have fought so hard to achieve."

One military source says Petraeus wants to start pulling out troops in December, bringing home one combat brigade a month, so that by next June, troop strength will be back to the pre-surge level of 130,000, reports Martin.

Petraeus made his prediction while meeting with a group of former Sunni insurgents who are now fighting with the Americans against al Qaeda. By one estimate, 30,000 former insurgents have joined the fight alongside U.S. forces, a contingency equal in size to the entire U.S. troop surge and with much better intelligence on the whereabouts of the enemy, reports Martin.