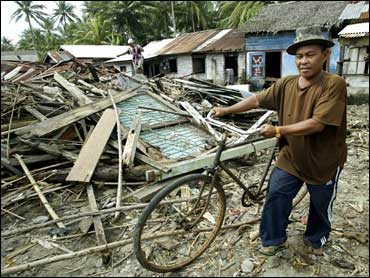 Indonesia was shaken Thursday by four powerful earthquakes in less than 24 hours, and survivors described watching in horror as the ocean retreated and raced back to shore as a 10-foot-high tsunami.

Hundreds of houses were destroyed in Wednesday's quake that sent panicked residents fleeing to the hills. At least 10 people were killed.

The most powerful quake Thursday was one registering a magnitude of 7.8, the U.S. Geological Survey said.

Several tsunami warnings were issued throughout the day, including one after a 6.2-magnitude quake at 12:09 p.m. EDT that was centered 166 miles offshore from the island of Sumatra, 34 miles beneath the ocean floor, the USGS said.

Wednesday's 8.4-magnitude quake that first shook Southeast Asia was the strongest this year. But the huge mass of water it spawned was pushed to sea rather than land, said Mike Turnbull, a seismologist at Australia's Central Queensland University.

"It's quirk of nature that this is how it happened," he said. "It could have quite easily have been the other way."

The 10-foot wave slammed into at least one village on Sumatra, the island ravaged by the 2004 tsunami that killed more than 230,000 people in a dozen nations.

Rukhlan, a 43-year-old fisherman, said residents of the village, Muara Maras, were horrified when they saw the ocean retreat and then race back to shore.

"I heard people screaming and yelling 'Tsunami! Tsunami!' " he said. "I ran to find my children, but they had already run to the hills."

A dozen houses were swept out to sea. Smaller waves were recorded further down the coast.

At least four other powerful tremors -- the largest a magnitude 7.8 -- followed on Thursday in western and eastern Indonesia, the U.S. Geological Survey said. Several tsunami warnings were issued, including one after a 6.2 tremor struck off Sumatra at 12:09 EDT.

It was centered 166 miles from the city of Padang, 34 miles beneath the ocean floor, the USGS said.

The worst destruction was caused by the jolts along the coast, especially in Padang.

"At least five large buildings -- including mosques, houses and a school -- collapsed," said Surya Budhi, who was overseeing emergency response in the area, and rescuers were searching for survivors at a badly damaged car dealership.

A fire also broke out on the fourth floor of a shopping mall.

Yulinar, a fisherman's wife who lives with her husband and five children in a wooden shack at a waterfront market, said the second, magnitude-7.8 quake, just six miles deep, was so powerful they had to grab onto the furniture to keep from falling down when it struck at 6:49 a.m.

"It was very bad," said Yulinar, who fled inland with her family after a tsunami warning from the mayor was broadcast through mosque speakers. "I was so scared the tsunami was coming."

Most of the most powerful quakes were off Sumatra island, striking several hours apart, but one hit Sulawesi, 1,800 miles to the east, the USGS said. All were shallow, with depths between 18 miles and six miles.

More than 30 aftershocks have rattled the region in the last day and many people refused to return to their homes, fearing a repeat of the 2004 tsunami. Nearly two-thirds of the deaths in that disaster were in nearby Aceh province.

Australia's Bureau of Meteorology warned Thursday that unusual waves could hit Christmas Island, but locals said there was no sign of a tsunami about an hour after the predicted time.

"The danger has passed," said Linda Cash, a manager at the Christmas Island Visitors Center, adding that police were telling people to stay away from beaches.

Telephone lines and electricity were disrupted across a large swath of Indonesia, making it difficult to get information about damage and casualties.

Death tolls released by several agencies ranged from five to 10. Rustam Pakaya, the chief of Health Crisis Center, gave the latter figure, which was based on information gathered from local hospitals, clinics and regional health offices. He said at least 49 people were injured.

Sensitive to criticism about slow responses to the 2004 tsunami disaster, governments issued alerts as far away as Kenya and Tanzania in East Africa, telling people to leave beaches. People in Mombasa, Kenya, crowded into buses after hearing the warning over the radio.

Sri Lankans were told to move at least 650 feet inland.

Indonesia, the world's largest archipelago, with a population of 235 million people, is prone to seismic upheaval due to its location on the "Ring of Fire," an arc of volcanoes and fault lines encircling the Pacific Basin.