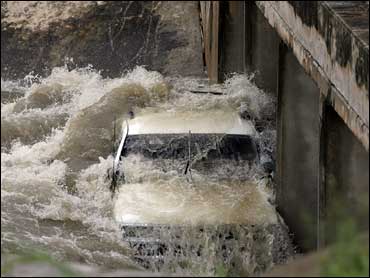 Recovery efforts were in full swing early Friday as water-logged Texas dealt with the rainy remnants of Tropical Storm Erin, which authorities blamed for at least four deaths and said could be a prelude to Hurricane Dean as it gathered strength in the Atlantic.

Erin dropped up to 10 inches of rain in parts of San Antonio and Houston, and officials throughout central and southern Texas braced for the possibility of more rain Friday morning while also keeping an eye on Dean as it ripped through the Caribbean with 100 mph winds, ripping off roofs in the French island of Martinique.

While there were no serious injuries in that area, a man was swept away Thursday in San Antonio after apparently getting out of his vehicle in floodwater, a police spokeswoman said. Three people died in a head-on collision on a rainy highway in Comal County, but Department of Public Safety Trooper Rick Alvarez said the cause of the crash was still under investigation.

In Houston, two people died after the waterlogged roof of a storage unit outside a Houston grocery store collapsed, according to Houston fire and Harris County hospital officials. Also in Harris County, a truck driver drowned in when his truck went into a flooded retention pond, according to county's Office of Emergency Management.

Summer storms have poured record rainfall across Texas and parts of Oklahoma and Kansas, with floods killing 22 people since mid-June.

The dangers of a slow-moving storm system are well known in Houston, where Tropical Storm Allison stalled for several days in 2001, soaking the flat, low-lying city. After passing Houston, it returned, dumping about 20 inches of rain in eight hours. About two dozen people died, most of the city was without power and entire neighborhoods were destroyed.

Still, state and local officials said Erin was a relatively calm rehearsal for the hurricane season.

In the Atlantic, Dean was centered about 50 miles west-southwest of Martinique at 8 a.m. EDT, and moving west at about 23 mph. The Category 2 hurricane was expected to intensify as it entered the warm waters of the Caribbean, heading toward Jamaica.

It was too early to tell whether the storm would eventually strike the United States, but officials were gearing up for the possibility of the season's most severe storm yet.

"It's really moving fast, and the forecast track keeps it at that speed," said meteorologist David Paul of CBS affiliate KHOU in Houston. "We could end up being threatened by this hurricane.

"Because of that, take this weekend to get your preparations in order," Paul said.

Shell Oil Co. evacuated 188 people this week from offshore facilities in Erin's path and said Thursday that it was monitoring Dean.

The eye of Dean, the first hurricane of the Atlantic season, passed between St. Lucia and Martinique, which are less than 50 miles apart, the National Hurricane Center in Miami said Friday.

"I saw the roof of a municipal building fly off. This is a very hard thing to experience right now," said Louis Joseph Manscour, deputy mayor of Trinite on Martinique.

Laurent Bigot, director of a crisis team on the French island, warned people to stay inside.

"We may not be spared on this occasion as it appears that we are likely to experience the worst," said Stephenson King, the acting prime minister of St. Lucia, an English-speaking, independent island.

Martinique officials set up cots at schoolhouse shelters while residents lined up at gas stations and emptied supermarket shelves.

"It's the first time I've seen this, all our water supply completely gone in less than two hours," said Jean Claude, a supermarket manager.

In St. Lucia, radio and television advisories urged people to stock up on canned food and fill their cars with gasoline. Volunteers knocked on doors to make sure people knew about the storm.

The National Hurricane Center in Miami said Dean would likely be a dangerous Category 3 hurricane by the time it reaches the central Caribbean. Forecasters say it appeared to be heading south of Puerto Rico, the U.S. Virgin Islands and the Dominican Republic and Haiti, which share the island of Hispaniola.

It predicted storm surge flooding at 2 to 4 feet above normal tide levels near the center of Dean as it passes over the Lesser Antilles and total possible rainfalls of 10 inches in mountainous areas.

About 300 American medical students from Ross University on the island of Dominica arrived in Puerto Rico after their families hired private planes, said Dr. Mauricio Gomez, from the UCLA Medical Center in California, whose fiancee was among the students.

"Everyone's very calm but taking it seriously," she said.