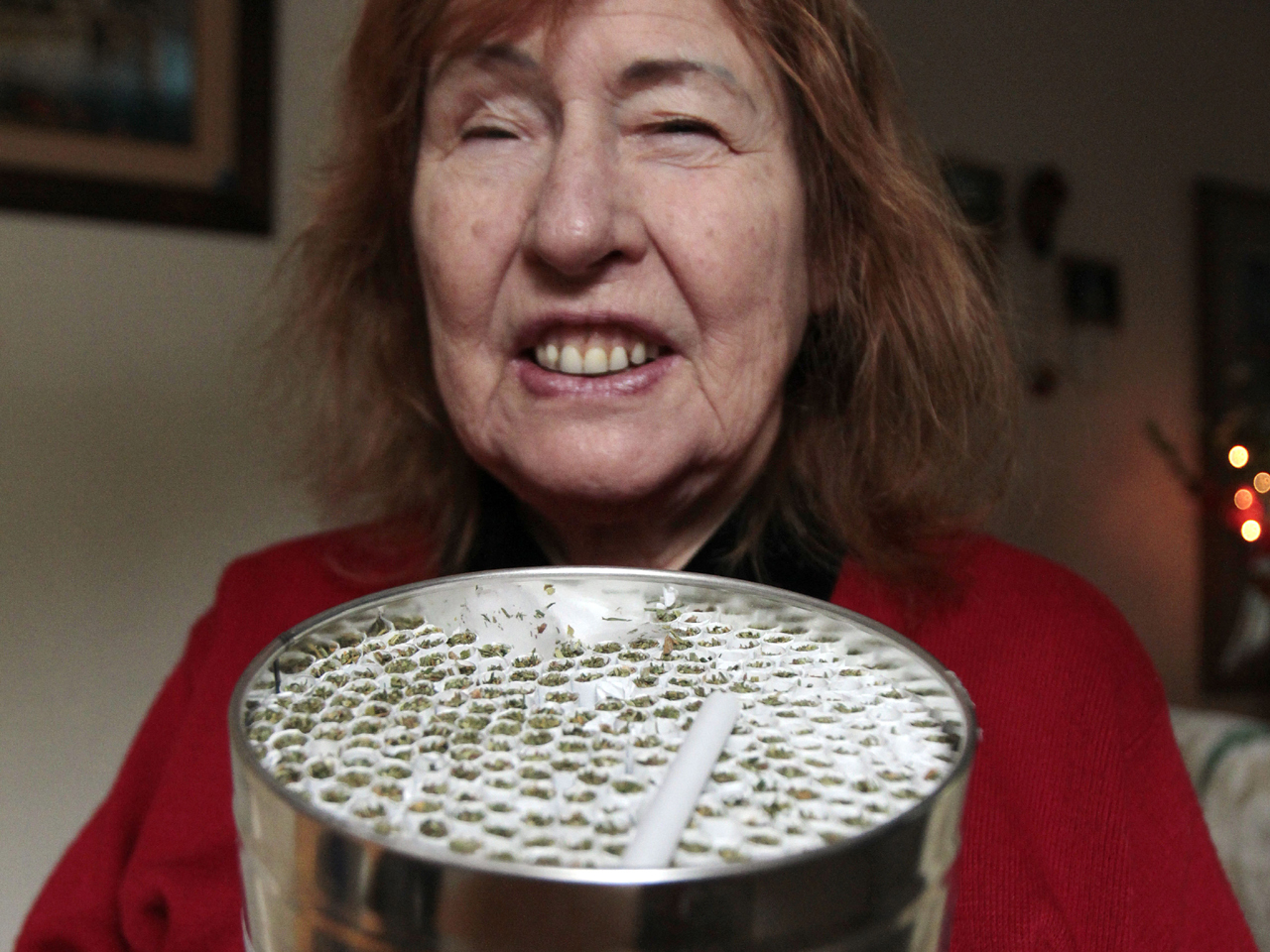 EUGENE, Oregon - Sometime after midnight on a moonlit rural Oregon highway, a state trooper checking a car he had just pulled over found less than an ounce of pot on one passenger: A chatty 72-year-old woman blind in one eye.

She insisted the weed was legal and was approved by the U.S. government.

The trooper and his supervisor were doubtful. But after a series of calls to the U.S. Attorney's Office, the Drug Enforcement Agency and her physician, the troopers handed her back the card — and her pot.

For the past three decades, Uncle Sam has been providing a handful of patients with some of the highest grade marijuana around. The program grew out of a 1976 court settlement that created the country's first legal pot smoker.

Advocates for legalizing marijuana or treating it as a medicine say the program is a glaring contradiction in the nation's 40-year war on drugs — maintaining the federal ban on pot while at the same time supplying it.

Government officials say there is no contradiction. The program is no longer accepting new patients, and public health authorities have concluded that there was no scientific value to it, Steven Gust of the U.S. National Institute on Drug Abuse told The Associated Press.

At one point, 14 people were getting government pot. Now, there are four left.

The government has only continued to supply the marijuana "for compassionate reasons," Gust said.

One of the recipients is Elvy Musikka, the chatty Oregon woman. A vocal marijuana advocate, Musikka relies on the pot to keep her glaucoma under control. She entered the program in 1988, and said that her experience with marijuana is proof that it works as a medicine.

They "won't acknowledge the fact that I do not have even one aspirin in this house," she said, leaning back on her couch, glass bong cradled in her hand. "I have no pain."

Marijuana is getting a look from states around the country considering calls to repeal decades-old marijuana prohibition laws. There are 16 states that have medical marijuana programs. In the three West Coast states, advocates are readying tax-and-sell or other legalization programs.

Marijuana was legal for much of U.S. history and was recognized as a medicine in 1850. Opposition to it began to gather and, by 1936, 48 states had passed laws regulating pot, fearing it could lead to addiction.

Anti-marijuana literature and films, like the infamous "Reefer Madness," helped fan those fears. Eventually, pot was classified among the most harmful of drugs, meaning it had no usefulness and a high potential for addiction.

In 1976, a federal judge ruled that the Food and Drug Administration must provide Robert Randall of Washington, D.C. with marijuana because of his glaucoma — no other drug could effectively combat his condition. Randall became the nation's first legal pot smoker since the drug's prohibition.

Eventually, the government created its program as part of a compromise over Randall's care in 1978, long before a single state passed a medical marijuana law. What followed were a series of petitions from people like Musikka (seen at left) to join the program.

President George H.W. Bush's administration, getting tough on crime and drugs, stopped accepting new patients in 1992. Many of the patients who had qualified had AIDS, and they were dying.

The AP asked the agency that administers the program, the National Institute on Drug Abuse, for documents showing how much marijuana has been sent to patients since the first patient in 1976.

The agency supplied full data for 2005-2011, which showed that during that period the federal government distributed more than 100 pounds of high-grade marijuana to patients.

Agency officials said records related to the program before 2005 had been destroyed, but were able to provide scattered records for a couple of years in the early 2000s.

The four patients remaining in the program estimate they have received a total of 584 pounds from the federal government over the years. On the street, that would be worth more than $500,000.

All of the marijuana comes from the University of Mississippi, where it is grown, harvested and stored.

Dr. Mahmoud ElSohly, who directs the operation, said the marijuana was a small part of the crop the university has been growing since 1968 for all cannabis research in the U.S. Among the studies are the pharmaceutical uses for synthetic mimics of pot's psychoactive ingredient, THC.

ElSohly said the four patients are getting pot with about 3 percent THC. He said 3 percent is about the range patients have preferred in blind tests.

The marijuana is then sent from Mississippi to a tightly controlled North Carolina lab, where they are rolled into cigarettes. And every month, steel tins with white labels are sent to Florida and Iowa. Packed inside each is a half-pound of marijuana rolled into 300 perfectly-wrapped joints.

With Musikka living in Oregon, she is entitled to more legal pot than anyone in the nation because she's also enrolled in the state's medical marijuana program. Neither Iowa nor Florida has approved marijuana as a medicine, so the federal pot is the only legal access to the drug for the other three patients.

The three other people in the program range in ages and doses of marijuana provided to them, but all consider themselves an endangered species that, once extinct, can be brushed aside by a federal government that pretends they don't exist.

All four have become crusaders for the marijuana-legalization movement. They're rock stars at pro-marijuana conferences, sought-after speakers and recognizable celebrities in the movement.

Irv Rosenfeld, a financial adviser in Fort Lauderdale, Florida, has been in the program since November 1982. His condition produces painful bone tumors, but he said marijuana has replaced prescription painkillers.

Rosenfeld likes to tell this story: In the mid-1980s, the federal government asked his doctor for an update on how Rosenfeld was doing. It was an update the doctor didn't believe the government was truly interested in. He had earlier tried to get a copy of the previous update, and was told the government couldn't find it, Rosenfeld said.

So instead of filling out the form, the doctor responded with a simple sentence written in large, red letters: "It's working."