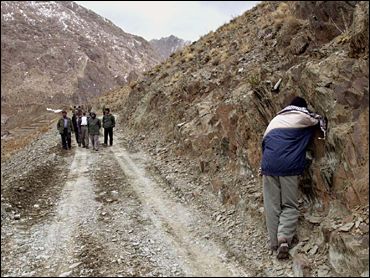 Search teams pressed through fog, rain and strong wind Thursday to recover some mutilated bodies from the mountainous site of a military plane crash that killed all 302 Iranian soldiers aboard, and grieving relatives tried to approach the heavily guarded scene.

A local revolutionary guards commander in charge of relief operations, Ali Jafari, told The Associated Press that more than 600 relief workers were searching the area to collect remains. He said bulldozers had created roads overnight to facilitate access to the site of the crash.

Jafari said two helicopters that tried to reach the crash site flew back to their base in Kerman because of bad weather, which the official Islamic Republic News Agency reported also was slowing down mountaineers, hampering efforts to retrieve remains.

Relief workers, who IRNA said earlier had confirmed there were no survivors, have set up more than a dozen tents to provide support for crash site search and recovery efforts.

All aboard — 18 crew and 284 passengers — were members of the Revolutionary Guards, an elite group under the direct control of supreme leader Ayatollah Ali Khamenei. The guards protect Iran's borders and defend ruling hard-liners in this ultraconservative society.

The Revolutionary Guards have encircled a big area at the crash site, preventing people from approaching and restricting journalists. Many relatives of the victims cried as armed guards prevented them from climbing to the crash site.

The aircraft lost contact with the control tower at about 5:30 p.m. Wednesday, before preparing to land at the Kerman airport. It crashed into the Sirach Mountains, 20 miles from its destination. Jafari said it was 330 feet shy of clearing the peak.

Air traffic controllers at Kerman said the pilot had radioed about bad weather and strong winds before losing contact, Tehran television reported. There was heavy snowfall in many parts of Iran on Tuesday and Wednesday, including Zahedan, which hadn't seen snow in three years.

Search teams early Thursday found part of the debris, including the plane's wing, near a tunnel that cuts through local mountains, the news agency reported.

The possibility of terrorism was not raised by any of the media reporting the crash.

A senior official in Zahedan told the AP that several of the victims were senior officers of the guard.

The crash was the latest in a string of plane accidents the Iranian government has blamed on U.S. sanctions, arguing that they have prevented the country from repairing and replacing its aging fleet. Trade between Iran and the United States has been frozen under sanctions Washington imposed after the 1979 takeover of the U.S. Embassy in Tehran.

Since the Islamic revolution that year, Iran has supplemented its fleet of Boeing and European-made Airbus airliners with planes bought or leased from the former Soviet Union. Iran is not allowed to buy European-made Airbuses because about 40 percent of their parts are U.S. made.

Tehran television quoted an anonymous official as saying the forces had come to the impoverished Sistan-Baluchestan province, of which Zahedan is the capital, for an "important mission."

Another official, speaking to The Associated Press on condition of anonymity, said the forces were in Zahedan to prepare for the visit of Khamenei, who was scheduled to tour the city on Friday. It was not clear whether that visit would still take place.

The government issued a statement offering condolences to the families of the victims and the governor-general of Kerman, Mohammad Ali Karimi, declared three days of mourning beginning Friday. Thursday was an Islamic holiday in Iran, the feast of Velayat, when Shiite Muslims believe Islam's prophet Mohammad appointed his son-in-law, Ali, as his successor.

Wednesday's crash was the deadliest in Iranian history with the toll surpassing the 290 killed on July 3, 1988, when an Iran Air A300 Airbus was shot down over the Persian Gulf by the USS Vincennes. The U.S. military said it misidentified the plane as an Iranian fighter, an account disputed by Iran.

In December, Transportation Minister Ahmad Khorram acknowledged that Iran's air industry was suffering from U.S. sanctions on purchase of American-made planes and warned of air disasters if the trade ban wasn't lifted.

The minister, speaking days after the Dec. 23 crash of a Ukrainian An-140 plane that killed 46 scientists, said several of Iran's aging Boeing and Airbus planes have been grounded because of technical problems and lack of spare parts. He said Iran's fleet had "reached a crisis point."

In February 2002, a Russian-made Tupolev Tu-154 airliner carrying 119 people smashed into snow-covered mountains not far from its destination of Khorramabad, 230 miles southwest of Tehran.

In May 2001, 30 people — including the then transportation minister — died when a Russian-made YAK-40 crashed in bad weather.