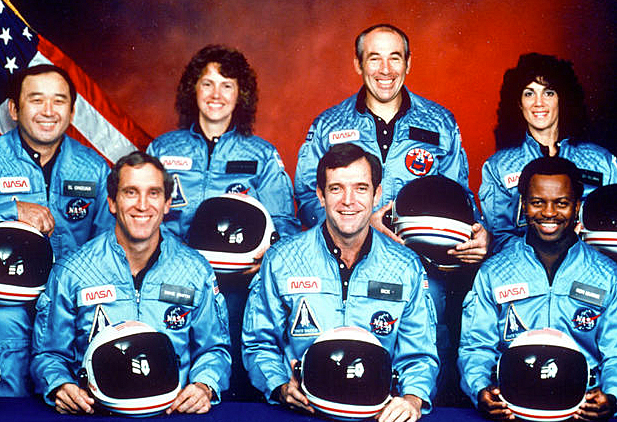 Thirty years after the space shuttle Challenger broke apart in the clear, cold sky high above Cape Canaveral, the commander's widow no longer feels anger at NASA and the management missteps and schedule pressure that kept the orbiters flying despite a fatal flaw in their solid-fuel boosters.

She tells CBS News she is at peace with history, her role in it, the heart-wrenching loss of her husband and his six crewmates and her connection with the countless people who will never forget America's loss of innocence on the high frontier.

"I am able now to treat the event as history rather than avoiding the public scrutiny that overcame us during our private grieving," said June Scobee Rodgers, whose husband, Francis "Dick" Scobee, commanded the 25th shuttle mission. "I'm envious when I look back at Dick Scobee's pictures, and he's so young, and I'm a great grandmother now!

"It's also interesting to hear the perspective from my children as adults when they talk about it," she said. "I still hear from people who can tell me exactly where they were and what they were doing, if they were old enough, at the time of the accident. And it's amazing to me. They want to share their story with me. It's as though they are sharing the experience of their own grief with me."

After multiple delays, Challenger blasted off on mission STS-51L at 11:38 a.m. EST on Jan. 28, 1986. It was the second of 16 missions planned for 1986 as the space agency struggled to meet a brutal schedule that included the back-to-back launches in May, five days apart, of two planetary probes from shuttles carrying complex hydrogen-fueled Centaur boosters.

The flight schedule also included a high-priority astronomy mission, the first military shuttle flight into polar orbit from Vandenberg Air Force Base in California, launch of the Hubble Space Telescope and the first fight of a journalist who would become the second so-called "private citizen" to fly in space.

The first was to be Christa McAuliffe, a New Hampshire high school teacher who won a nationwide competition to teach lessons from space. She was strapped into a seat on Challenger's lower deck, between Ronald McNair on her left and Hughes Aircraft Co. satellite engineer Gregory Jarvis on her right.

It was a cold day after a night of sub-freezing weather, but the sky was clear and Challenger put on a thrilling show as it climbed away atop a churning trail of fiery exhaust. Moments later, the crackling roar of those huge boosters reached the LCC and nearby press site.

"You can imagine, we were on top of the world, I mean, Dick and I were going fast down this highway," Scobee Rodgers said. "We married as teenagers, he wanted to be a pilot, I wanted to be an educator, we worked together, helping each other with college, careers, two wonderful children. It was the top of our careers, the top of our lives, I mean, he is now the commander of the space shuttle!

"It's a big deal, and I'm so proud that he is involved in the Teacher in Space program because I was a college professor at the time. I loved and thought the world of Christa McAuliffe."

The liftoff appeared normal enough, but 73 seconds later, as the shuttle was passing through 46,000 feet at a velocity just under twice the speed of sound, the spacecraft was engulfed in a sudden maelstrom of fiery vapor and debris.

From the roof of the LCC and the nearby press site, the orbiter could not be seen, it had disappeared behind the booster exhaust plume seconds earlier as the vehicle arced away to the east. Then, suddenly, the plume appeared to expand and contrails of some sort could be seen shooting out. First one and then the other solid-fuel booster careened away from the ballooning conflagration, corkscrewing aimlessly through the sky.

Shocked onlookers knew something unusual and probably catastrophic had occurred, but it took several agonizing moments for the severity of the problem to sink in. Some began wondering if Scobee and Smith might be attempting an emergency return-to-launch-site -- RTLS -- abort.

NASA commentator Steve Nesbitt in mission control at the Johnson Space Center in Houston did not immediately realize what had happened as he read off trajectory data from his console's display: "One minute 15 seconds. Velocity 2,900 feet per second (1,977 mph). Altitude 9 nautical miles. Downrange distance 7 nautical miles."

Perry: Flight, FIDO, till we get stuff back he's on his cue card for abort modes."

Nesbitt, sitting near Greene in mission control, then uttered the first words heard by the public in the wake of the unfolding disaster and inadvertently offered a description that would go down as one of the great understatements of the space age: "Flight controllers here are looking very carefully at the situation. Obviously a major malfunction."

"I could see them, and I could see their anxiety as it came down to the launch period and then how happy they were when they saw the actual liftoff," he recalled. "You could see just tremendous joy in their faces. Then, when the explosion happened, I think I was like many of the veterans there, we knew immediately that this was a catastrophe. Christa McAuliffe's parents did not know that. They thought there was a problem, but they did not have any idea at all of what had happened."

On the roof of the launch control center, Nesbitt's words over loud speakers hit the families hard.

"So here we are, celebrating, and then this major plummet, your grief, your shock, are numbing," Scobee Rodgers said. "It takes you from the highest point in your life to the lowest that you never thought you could possibly reached."

She remembers the solid rocket boosters "came screaming off in the wrong direction, and explosions. I don't have to be told it's a 'major malfunction,' I'd seen enough launches, I knew. It was a scary, terribly numbing. I couldn't even walk down the stairs. I fell, my son reached over and helped me, I was so numb and stiff, paralyzing, from viewing that."

At the same time, she remembers feeling grief for the school children across the nation who were watching the launch in their classrooms and looking forward to McAuliffe's lessons from space.

"I mean, everyone was concerned and interested in the teacher," Scobee Rodgers said. "As the commander's wife, I felt a great deal of responsibility to help not only my children and the other spouses and their children, but a nation of school children awaiting the lessons from space. ... When we heard the words 'major malfunction,' I knew. I knew it was a terrible disaster."

So did the relatively small contingent of reporters at the nearby press site. CNN reporter John Zarella called it "a horrible, horrible setback for a program that had seen so much incredible success."

"There was so much built up about the space shuttle and what it was going to be able to do and accomplish and how many times they were going to be able to fly it every year," he recalled in an interview. "The way it had been sold to the public and to the media and sold to Congress and everybody else and all of that, in one single instant, was over. It was over. Everything in a single instant changed."

The families were quickly whisked away to NASA's astronaut crew quarters, the motel-like suites of rooms in the Operations and Checkout Building well away from the LCC and press site. It was there that George Abbey, the director of flight crew operations at the time, told them there was no hope for the crew.

"We knew about return to launch (site aborts), places where you can land, I'd heard about all those places and you were just hoping that somehow they were safe," Scobee Rodgers said. "But he told us they were all lost. Which I could have guessed, just from the reaction of other people and hearing the radio in the background."

"We stood in a circle and they came in and none of them spoke," Scobee Rodgers recalled. "No NASA official spoke, their heads were bowed. Everyone's grieving, I mean it's shock. So, I looked to the families and they nodded to me and I thought well, I guess earlier this morning the commander would have spoken, so I will speak.

"I thanked them for coming, I knew from the crew and from the families how important space flight was, so I made the request that NASA be able to continue with space flight once they found the cause of the accident. The vice president walked over and gave me his home phone number and said 'call if you need to talk.'"

In the weeks and months that followed, a presidential commission chaired by former Secretary of State William Rogers would determine the accident was triggered by the failure of O-ring seals between two fuel segments in Challenger's right-side SRB, allowing a deadly jet of flame to burn through the side of the rocket.

They learned that the seals had experienced repeated erosion during earlier launchings and that the night before Challenger's flight, engineers with Morton Thiokol, builder of the SRBs, recommended a delay because of low overnight temperatures that could make the O-rings too stiff to function properly.

And they learned how Thiokol managers, pressured by their NASA counterparts, overruled the engineers' objections and opted to proceed with launch.

Scobee Rodgers, like many family members, was angered by many of the commissions findings.

"I think everyone was angry -- surprised, shocked and angry," she said. "I remember they had all the families together in Washington, D.C., my son was with me, a cadet at the Air Force Academy (now an Air Force major general), and he pounded the desk, hard, when they announced that. We were very upset.

In the wake of the accident, NASA redesigned the booster fuel segment joints, added a third O-ring and heaters to make sure the seals would work properly under a wide variety of conditions. Numerous other changes were implemented to improve communications and oversight and senior astronauts were put in key management positions.

NASA resumed shuttle flights in 1988 and by the time the fleet was retired in 2011, 220 solid-fuel boosters had been successfully launched on 110 shuttle missions, all without incident.

The families, of course, moved on. Scobee Rodgers married an Army general, Don Rodgers, and led the families' efforts to establish a network of educational centers focused on science, technology and mathematics. Challenger Centers are now in operation in 40 towns and cities around the world and have reached an estimated 4.4 million school kids.

"For so many years I was the founding chairman, I was there all the time, every day," Scobee Rodgers said. "Then there was development and growth and I was able to back away some and be a board member with everybody else. And now I just get excited to hear what they're doing. We're a leader in STEM education. It's been around for 30 years. We've kept up with it, evolving as we have."

Scobee Rodgers stays in touch with all the Challenger families, saying "we're all growing older! Thirty years! We go to each others' kids' graduations, weddings, we see each other regularly. We all still serve on the Challenger board of directors."

She and several other family members planned to attend a memorial service Thursday at the Kennedy Space Center.