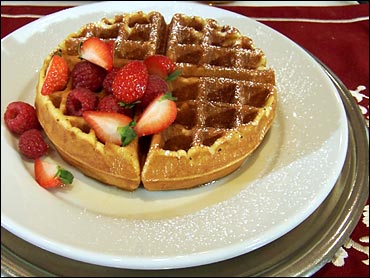 "Apparently there was a line at the waffle maker, and a couple of people felt an individual had cut in line, and that sparked a verbal argument," Cole said.

"One lady walked up to another lady and asked if she was in line for the waffle maker thing and the lady never answered her," Cole said. "So the first lady went and made a waffle, and when she went to go and take it this other gal tried to take it from her and that started the fight over the waffle."

Cole said prejudices related to the ethnicity of one of the women in the argument may have played a role in the fight.

"The second lady was of Middle Eastern decent and some comments were made about her not understanding English," Cole said.

The argument escalated from there, Cole said, eventually including more than two dozen people.

In the end, there were no arrests, but deputies stood stood by as all of the guests involved were kicked off the property.

No one was injured, but Cole said the fight put a strain on local police resources.

"We had two-thirds of our road patrol tied up on this fiasco," he said.