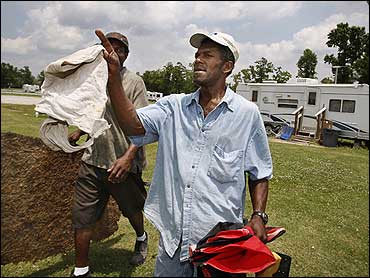 The last Louisiana residents displaced by hurricanes Katrina and Rita in 2005 are being moved from the state's remaining six federally-managed trailer parks.

The Federal Emergency Management Agency planned to close all six by Sunday - the official start of hurricane season - but said it would take a few more days to move everyone into apartments or motels.

The last FEMA-managed trailer park in Mississippi closed in May, but by Saturday, the state still had eight group sites for mobile homes open.

More than 800 families have come through Renaissance Village in Baker, Louisiana, since it opened in October 2005. By Saturday, only about 40 of the 575 units were occupied, and more than 20 of those households already have apartments to move into in the coming days, FEMA spokesman Manuel Broussard said.

Broussard said FEMA is working to find proper housing for the remaining households. That has not been easy since Katrina wiped out much of the region's affordable housing and sent rents soaring in greater New Orleans.

As of Saturday, only about 350 of the state's 15,912 FEMA trailers or mobile homes were in trailer parks, said spokesman Andrew Thomas. Thousands of people still live in trailers on private property, generally in front of hurricane-damaged homes they're fixing up or on lots they're rebuilding. In those cases, FEMA is helping municipalities in their efforts to get rid of the trailers.

There's a sense of urgency, underscored by Saturday's FEMA deadline for its parks. One reason is that tests of hundreds of trailers found high levels of formaldehyde, a preservative commonly used in building materials that can cause breathing problems and is classified as a carcinogen.

Most of the families leaving the trailer parks are eligible for government-subsidized housing until March 2009. Those who can't prove where they were living when the hurricanes struck, or who are ineligible for other reasons, get one more month in an apartment or motel room paid for by FEMA.