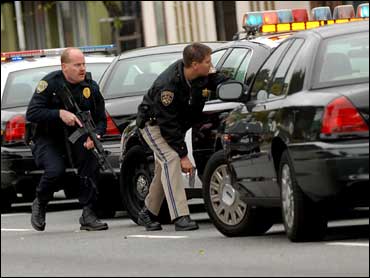 A police officer shot during a traffic stop has been pronounced brain dead but remained on life support, police said Sunday, retracting an earlier statement that he had died.

Oakland police spokesman Jeff Thomason announced the death of 41-year-old Officer John Hege earlier Sunday but later said that Hege was being kept alive while a final decision was made about donating his organs.

CBS Station KPIX reports that Mixon, who had an "extensive criminal history," had a no-bail warrant for his arrest. Mixon wielded two different weapons, including an assault rifle, when he came into contact with police on Saturday, said OPD Deputy Chief Jeffery Israel.

"(Mixon) was on parole and he had a warrant out for his arrest for violating that parole. And he was on parole for assault with a deadly weapon," Israel said.

Mixon's family defended the parolee. A cousin of Mixon's said Sunday that he was "not a monster."

Oakland police said never in the department's history had so many officers been killed in the line of duty in a single day.

The violence began when Hege and Dunakin, both on motorcycles, stopped a 1995 Buick sedan in east Oakland, Thomason said. The driver opened fire, killing Dunakin and gravely wounding Hege.

The gunman then fled on foot, police said, leading to an intense manhunt by dozens of Oakland police, California Highway Patrol officers and Alameda County sheriff deputies. Streets were roped off and an entire area of east Oakland closed to traffic.

Around 3:30 p.m. officers got an anonymous tip that the gunman was inside a nearby apartment building. A SWAT team entered the building when the gunman opened fire, police said. Romans and Sakai were killed and a third officer was grazed by a bullet, police said.

"It's in these moments that words are extraordinarily inadequate," said Mayor Ron Dellums at a somber news conference announcing the slayings.

Gov. Arnold Schwarzenegger ordered flags at the state capitol flown at half-staff Sunday in honor of the slain officers. He arrived in Oakland on Sunday afternoon to meet with Dellums and members of the police department.

"All four officers dedicated their lives to public safety and selflessly worked to protect the people of Oakland," he said in a statement. "Our thoughts and prayers are with the families of those lost, the Oakland Police Department and law enforcement officers throughout California during this difficult time."

Police said they did not know why the officers initially stopped the suspect, but said it apparently was a routine traffic stop. Thomason said Mixon had an extensive criminal history and was wanted on a no-bail warrant.

(AP Photo/D. Ross Cameron)
California Attorney General Jerry Brown (left, at a press conference with Mayor Dellums, second from right), said, "It's just an indication to me that our prison system is broken, the parole system is inadequate, and instead of cutting back and putting more and more burdens and restrictions, we have to give the police greater authority to do their work and protect the citizens."

Hege said the slain shooting suspect "was evidently terribly desperate. It is a sad story."

LaTasha Mixon, 28, of Sacramento said Sunday that her cousin was "not a monster." She said her family's prayers were with the slain officers' relatives.