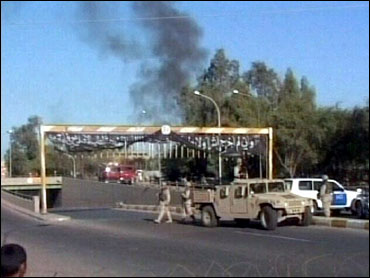 A suicide attacker detonated a car bomb Thursday outside the so-called Green Zone that houses the U.S. headquarters in Baghdad, killing five Iraqi civilians and a U.S. soldier.

Twenty-five people, including two American soldiers, were injured in the blast. The bomb, hidden inside an orange-and-white Baghdad taxi, exploded outside a three-foot-high concrete blast wall that protects a U.S. checkpoint.

"There was a long line of cars. Fortunately, the blast barriers worked in this case," said Col. John Murray of the U.S. Army's Texas-based 1st Cavalry Division.

Also Thursday, the U.S. command said that two U.S. soldiers were killed and two were wounded when a roadside bomb exploded in Baghdad. A total of 761 U.S. service members have died since President Bush launched the invasion of Iraq in March 2003.

U.S. soldiers backed by tanks and armored fighting vehicles seized control of the governor's office from Shiite militiamen in the holy city of Najaf. Heavy shooting could be heard and plumes of smoke rose over the city.