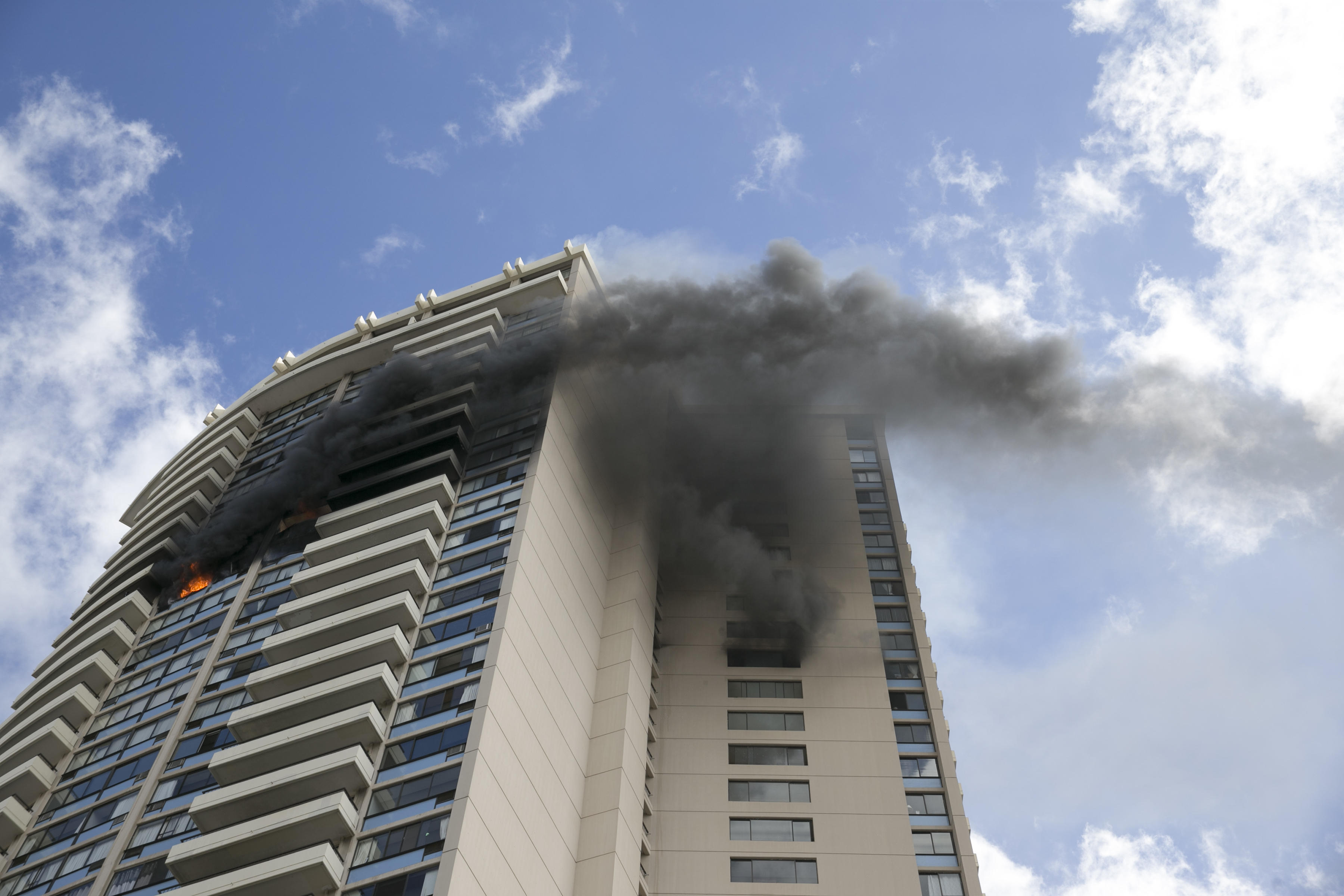 HONOLULU -- At least three people died and 12 were injured Friday in a fire at a Honolulu high-rise that was not equipped with sprinklers, authorities said, and hundreds fled the giant condominium complex as smoke billowed from the upper floors.

The dead were found on the 26th floor, where the fire broke out around 2:15 p.m., said Fire Chief Manuel Neves. Neves said the Marco Polo apartment complex does not have fire sprinklers, CBS affiliate KGMB-TV reports.

The blaze spread to at least the 28th floor and several units, said Honolulu Fire Department spokesman Capt. David Jenkins. He said the number of fatalities could change.

Firefighters were searching the damaged areas to make sure no additional people perished.

The 36-floor building near the tourist mecca of Waikiki was built in 1971, before sprinklers were required.

"Without a doubt if there were sprinklers in this apartment, the fire would be contained to the unit of origin," he said.

Four of the injured, including a firefighter, were hospitalized in serious condition, officials said.

Karen Hastings, 71, was in her 31st floor apartment when the fire broke out. She smelled smoke, ran on to her balcony and looked down to see flames below her.

"The next thing we know the fire causes the windows to blow out, and we can see glass flying all the way down," Hastings said. "I says, 'my goodness, anybody who is outside is going to get clobbered with glass.'"

Then, she said, "the fire just blew up and went flying right out the windows. And that was like a horror movie. Except it wasn't a horror movie, it was for real."

She and a neighbor ran through the haze down 14 floors until they found a safe stairwell to get some air.

"We actually saw a person laying on a ledge and I don't know whether he made it not," Hastings said.

The building is vast and wave-shaped, and has several sections. The blaze was mostly confined to a single section, and only the units immediately above it and to the side of it were evacuated, while many residents stayed inside.

The blaze was still burning some four hours after it broke out as the sun set, but it was down to mostly embers by then, official said.

Cory La Roe, who is from Florida and stationed in Hawaii with the Air Force, works night shifts and was asleep when siren sounds woke him at about 2:15 p.m.

"First thing, I was kind of disoriented and confused about what was going on, so I looked out my window and saw people running away from the building, looking back toward it."

La Roe said he didn't hear any verbal announcements and there were no flashing fire alarm lights in the building, but "after I saw people running out and went out to the hallway, I knew it was a fire alarm."

He saw an elderly couple come down that looked "sooty" who were taken to the hospital. He saw other people brought out on stretchers.

He didn't realize that the building didn't have a sprinkler system and was surprised that was the case.

"That's one thing that I wasn't aware of prior to moving in," La Roe said. "It was definitely shocking for me to know that there weren't any sprinklers installed in the building."

"The biggest argument is the affordability," Caldwell said. "Residents have to pay. It's pretty expensive. But if it saves a life and it's your life, it's worth the cost."

No one from the building said they remembered recent fire drills, but Anna Viggiano, who lives on the 6th floor, said there were some after a 2013 fire that broke out two floors above her. She said since then she doesn't hesitate to evacuate when she hears the alarm.