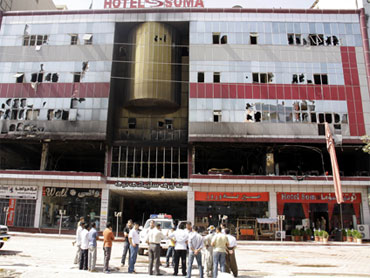 A fire in a five-story hotel in northern Iraq killed 28 people, half of them foreigners, in a harrowing blaze that forced several victims to jump to their deaths to escape a building without fire escapes, officials and witnesses said Friday.

The fire in the Kurdish city of Sulaimaniyah began late Thursday night in the Soma Hotel and was sparked by an electrical short, said chief of police Brig. Gen. Najim-al-Din Qadir. Four women and four children were among the dead, he added.

Witnesses described a terrifying scene of panicked guests frantically trying to escape the burning building that officials said lacked fire escapes, some flinging themselves from windows in desperation.

The health department manager in Sulaimaniyah confirmed to CBS News that at least one American woman was killed in the blaze.

French news agency AFP reported that four American nationals were among the dead, according to a hospital official in the city.

Fourteen of the victims were foreigners, some of whom worked for foreign oil companies.

Work and investment opportunities have led many foreigners to flock to Iraq's Kurdish oil-rich north, a region where the thriving economy contrasts sharply with other parts of a country ravaged by sectarian violence unleashed by the 2003 U.S.-led invasion.

Witnesses described a chaotic scene in which smoke filled the hallways and billowed out of the windows, forcing some hotel guests to jump from the upper floors in a desperate attempt to avoid the flames.

Sulaimaniyah fire department head Brig. Yadgar Mohammed Mustafa said the fire raged for almost five hours through the night. He said most of the victims succumbed to smoke inhalation, and the lack of fire escapes contributed to the high death toll.

Firefighters could be seen working throughout the night to put out the fire in what was once a gleaming, modern building of mirrored-glass windows. In the morning, smoke darkened much of the building's facade, and many of the windows were smashed and broken.

One man who was visiting friends at the hotel, Mariwan Asaad, described seeing flames and smoke filling the corridors on the third floor, forcing him to stumble blindly in search of a way out. Through the open doorway of one room he saw a man lying on the floor, dead from smoke inhalation.

"I entered the room and threw myself from the window. I broke my legs. The pain was so great that I lost consciousness. I found myself in the hospital," he said, speaking just before going into the operating room for surgery.

Kameran Ahmed, who owns an electrical supply shop next to the hotel, said other people were also frantically trying to escape the blaze.

"I saw three people jump from their floor to escape the fire, but they were killed when they hit the ground," said Ahmed.

The police chief said that using the passports of the deceased, authorities determined that the dead included people from Cambodia, Bangladesh, Canada, Australia, Ecuador, South Africa, Britain, Lebanon, Venezuela, Sri Lanka and one who was believed to be a foreigner but did not have identification.

The police chief said authorities determined that one person in the city morgue who was previously believed to be a fire victim died in an unrelated incident.

The top health official in Sulaimaniyah, Rekwt Mohammed, confirmed the toll, adding that one of the dead was a pregnant woman.

The general director of the AsiaCell mobile phone company, Farouq Mulla Mustafa, said four of its engineers from the Philippines, Iraq, Sri Lanka and Cambodia were among the dead.

Hawri Hassan, the owner of the neighboring Hema Hotel, said the blaze in the Soma Hotel appeared to start in the second story, and quickly spread to the other floors. He said at least three people jumped from the fifth floor.

Hassan said the fire also spread to his hotel, but his employees were able to quickly extinguish it.

Sulaimaniyah, 160 miles northeast of Baghdad, is the commercial capital of Iraq's Kurdish autonomous region and the second largest city the Kurdish region.

While the rest of Iraq has been plagued by violence since the 2003 U.S.-led invasion, the Kurdish region has enjoyed relative stability, benefitting from a construction boom that has seen investors throw up houses, hotels and office buildings.

The area is a thriving trade hub, with close links to Turkey and Iran. Kurdish officials have sought to cast their semiautonomous territory as a business-friendly haven in a country otherwise struggling with political and security woes.

The growth and stability in the region have also spurred a growing number of airlines to fly into the Kurdish region, some from as far away as Austria.

A number of foreign oil companies operate in the Kurdish north, which sits atop about 40 percent of Iraq's total 115 billion barrels of proven crude oil reserves.

Despite Iraq's instability and struggling economy, the country - especially the three provinces that make up the Kurdish region - is still a destination for migrant workers, mostly from Asia and Africa, said Jean-Philippe Chauzy, a spokesman for the Geneva-based International Organization for Migration.

Many Iraqis, desperate to get away from the heat and violence in the rest of the country, also vacation in the Kurdish region in the summer.

Waleed Mohammed, marketing manager in Sulamaniyah for Lafarge SA, the world's largest cement maker, said some Kurdish businessmen who had worked in Europe or the Gulf states were bringing in workers from countries such as India or Bangladesh, in part because they were better trained than Kurdish workers.

However, the lack of fire escapes at the building raises questions about the Kurdish building boom and whether corners are being cut in pursuit of economic growth.

"There is too much building going on in Sulamaniyah without enough government oversight," said one builder in the city, Arass Karim Wali. "Most of them have no safety regulations, especially in the hotels and the markets."