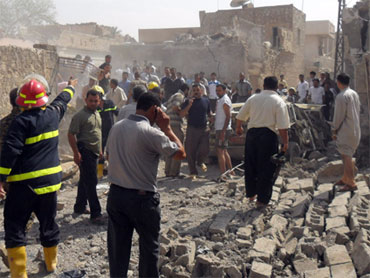 An Iraqi interpreter for the U.S. military was gunned down on Friday by his son and nephew north of the capital after he refused their demands to quit his job, a police official said.

The attack occurred as at least 27 people were killed nationwide, a grim reminder of the dangers facing Iraqis despite a sharp drop in violence over the past few years. In the deadliest attack, insurgents ambushed a checkpoint near the Syrian border, killing seven Iraqi soldiers and wounding an eighth.

Hameed al-Daraji, who had worked as a translator for the U.S. military since 2003 against the wishes of his family, was shot in the chest in his house in Samarra, 60 miles (95 kilometers) north of Baghdad, police Lt. Emad Muhsin said.

He said al-Daraji was constantly fighting with his relatives over his job, but he ignored their pleas for him to quit.

Al-Daraji's son and nephew were arrested after the attack and confessed to being members of an al Qaeda-linked group that sanctioned the killing, Muhsin said, adding that police were searching for a second son suspected of being an accomplice.

Iraqis working for the U.S. military in the country have been targets of extremist groups who view them as traitors and collaborators with an invading country. But it is rare for family members to kill a relative because of his or her employment with the Americans in Iraq.

The seven Iraqi soldiers were killed by a group of gunmen who pulled up to the checkpoint near the Qaim border town in pickups and opened fire, according to police, hospital and provincial officials.

They say the gunmen shot an eighth soldier several times but left him alive "to convey a message to the Iraqi army." The area in which the attack occurred is in the former insurgent stronghold of Anbar province.

Provincial council member Sheik Efan Saadoun blamed the attack on a decision to replace police with Iraqi soldiers who are less familiar with the local surroundings.

One blew up in the northern city of Tuz Khormato about 50 yards (meters) from the house of Niazi Mohammed, a Turkomen member of the Salahuddin provincial council, according to police.

City police chief Col. Hussein Ali said at least eight people were killed and 69 wounded in the blast, which left some 20 houses heavily damaged. A second car bomb was discovered about 100 yards (meters) from the blast site, but it did not explode, Ali said.

"We believe that al Qaeda was behind today's attack in order to destabilize security and re-ignite sectarian strife," he said.

Mohammed, who was not home at the time of the blast, condemned the attack, saying it only hurt innocent civilians.

"My job in the provincial council is to serve people and it has nothing to do with security forces," he said.

Another blast targeted the house of police Capt. Mustafa Mohammed in Baqouba northeast of Baghdad, killing two neighbors and wounding 27 other people, including some of the officer's relatives, police said.

The officials reported the violence on condition of anonymity because they weren't authorized to release the information to the media.

Hours later, a bomb exploded at the gate of a house, killing three residents, a man and two women, who sold tea and water to soldiers at a nearby Iraqi army checkpoint, according to police and hospital officials.

Police said the residents had ignored insurgent warnings to cut off relations with the soldiers.

Elsewhere in Iraq, gunmen killed an employee of a local irrigation department and three of his family members Friday as part of an apparent tribal dispute over water distribution west of Baghdad, officials said.

The attack came a day after an anti-al Qaeda fighter and members of his immediate family were killed in another village, but police said the man killed Friday had no ties to the terror network or Iraqi security forces, who are also frequently targeted by insurgents in Iraq.

Faisal Hassan, the 40-year-old driver of a drilling truck, his wife and two young children were slain as they slept in a pre-dawn attack in the mainly Sunni district of Abu Ghraib, police said.

Irrigation department employees have increasingly been targeted in the area as rival tribal factions battle over the distribution of water. Another employee and the son of the department's director also were killed earlier this year, police said.

"Because of the frequent attacks on these employees, their job has become as risky as working with the police or Sahwa," said Mohammed Khudair, an investigator with the Abu Ghraib police department. Sahwa, or Awakening Councils, are government-backed Sunni militias that first revolted against al Qaeda in Iraq in late 2006 with U.S. backing.

Such attacks in which entire families were gunned down were common at the height of Shiite-Sunni bloodshed that pushed the country to the brink of civil war in 2006-2007. Violence has dropped sharply since, but attacks continue, raising concerns about the readiness of the Iraqis to protect the people as the U.S. military prepares to withdraw its forces by the end of next year.

A bomb struck an oil pipeline near Beiji, 155 miles (250 kilometers) north of Baghdad, filling the sky with thick, black smoke as cleanup crews burned the oil that was leaking into the nearby Tigris River, officials said.

Abdul-Aziz Muslih, an official at the Beiji refinery, said the pipeline links oil fields in Kirkuk with Beiji. The Iraqi army had sealed off the site while firefighters battled to put out the blaze.