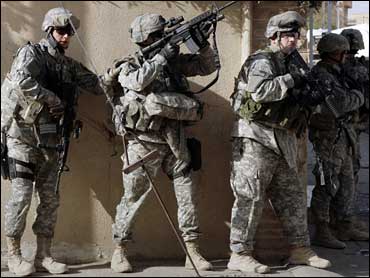 With nearly two months remaining, 2007 became the bloodiest year of the Iraq war for American troops - 853 dead. The U.S. military on Tuesday announced the deaths of five more soldiers and one sailor, pushing the toll past the previous worst - 850 in 2004.

A senior Navy officer, meanwhile, announced the planned release of nine Iranian prisoners and was at pains to say that a major cache of Iranian-made weapons and bombs displayed for reporters appeared to have been shipped into Iraq before Tehran made a vow to stop the flow of armaments.

Defense Secretary Robert Gates said last week that Iran had made such assurances to the Iraqi government. He did not reveal when the pledge was issued.

While 2007 became the war's deadliest year, there has been a sharp downturn in both Iraqi and American deaths over the past two months and a decline in Iranian weapons deliveries could be one of several factors for the decrease.

"It's our best judgment that these particular EFPs ... in recent large cache finds do not appear to have arrived here in Iraq after those pledges were made," Rear Adm. Gregory Smith, director of the Multi-National Force-Iraq's communications division, told reporters Tuesday.

Among the weapons Washington has accused Iran of supplying to Iraqi Shiite militia fighters are EFPs, or explosively formed projectiles. They fire a slug of molten metal capable of penetrating even the most heavily armored military vehicles, and thus are more deadly than other roadside bombs.

The No. 2 U.S. commander in Iraq, Lt. Gen. Ray Odierno, said last week that there had been a sharp decline in the number of EFPs found in Iraq in the last three months. At the time, he and Gates both said it was too early to tell whether the trend would hold, and whether it could be attributed to action by Iranian authorities. Iran publicly denies that it has sent weapons to Shiite militias in Iraq.

Two of the Iranians who will be freed "in the coming days" were among five captured in a January U.S. raid on an Iranian government facility in Irbil, the capital of Iraq's autonomous Kurdish region in the north of the country.

Smith told reporters the identities of the nine Iranians would be released later and that many of them had been taken prisoner through the course of the war. He said the decision to release the nine was made after they were determined not to be a threat to U.S. forces.