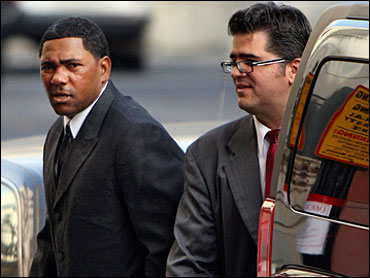 All-Star shortstop Miguel Tejada pleaded guilty Wednesday to lying to Congress about the use of performance-enhancing drugs and admitted buying what he believed was human growth hormone.

Appearing before a federal magistrate, the 34-year-old starter for the Houston Astros admitted that he lied to congressional investigators who had asked about steroid use by major league ballplayers. Tejada also acknowledged purchasing the drugs while playing with the Oakland Athletics.

He said he threw the drug away without using it. Prosecutors said they had no evidence to contradict his claim.

Asked if he was pleading guilty, Tejada told the judge, "Yes." One of his attorneys patted him on the shoulder during the exchange.

Tejada, who was born in the Dominican Republic, listened through headphones to a simultaneous Spanish translation as federal Magistrate Judge Alan Kay warned him of the rights he was waiving with a guilty plea.

"Your plea of guilty may have some impact on your immigration status here in the United States," Kay said.

Tejada responded that he understood and had discussed his fate with his attorney.

The misdemeanor charge of making misrepresentations to Congress can lead to as much as a year in jail. But federal guidelines call for a lighter sentence.

Tejada and his two lawyers declined to answer questions as they left the courthouse. They had scheduled a news conference in Houston later in the day.

Tejada was the American League's Most Valuable Player in 2002 while playing for the Athletics.

Federal authorities also are investigating whether Roger Clemens lied to Congress when he denied using steroids or human growth hormone.

Charges against Tejada were detailed in documents filed in court Tuesday, a day after superstar Alex Rodriguez acknowledged past use of performance-enhancing drugs. The New York Yankees third baseman does not face charges.

Clemens and Rodriguez are atop a list of drug-tainted stars that includes Barry Bonds, Mark McGwire and Jose Canseco, whose actions cast doubt on their on-field accomplishments.

In the court papers, Tejada is charged with lying to investigators for the House Committee on Oversight and Government Reform in 2005. Congressional staffers did not place Tejada under oath when they questioned him, but court documents say the investigators advised him "of the importance of providing truthful answers."

Tejada came under scrutiny after another ex-teammate, the Baltimore Orioles' Rafael Palmeiro, testified before the House committee and declared that he'd never used steroids.

Palmeiro was suspended by baseball later that year after testing positive for steroids. He said the positive result must have been caused by a B-12 vitamin injection given to him by Tejada.