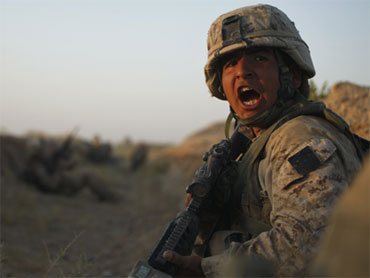 An Afghan policeman conducting a joint operation with U.S. soldiers opened fire on the Americans, killing two of them before fleeing, an Afghan official said Saturday, raising fears that militants have infiltrated the ranks of Afghan forces.

The U.S. military earlier said two American troops died in a firefight in Wardak on Friday, but declined to confirm any new details.

Although Afghan forces have periodically turned their guns on international troops, training and working jointly with Afghan police and soldiers on patrols and operations are key to the U.S. strategy of curbing the spreading Taliban-led insurgency.

Shahidullah Shahid, a spokesman for the Wardak provincial governor, said the policeman fired on the Americans while they were patrolling together Friday night, killing two and injuring two. Shahid said two of the officer's relatives were in custody for questioning.

A third U.S. service member died Friday of wounds from a bomb attack in Wardak the day before.

Over a period of less than a month last year, Afghan policemen twice attacked American soldiers in the east. In October 2008, a policeman hurled a grenade and opened fire on a U.S. foot patrol, killing one soldier. In September 2008, an officer opened fire at a Paktia police station, killing a soldier and wounding three before he was fatally shot.

Most recently, an American service member and an Afghan police officer argued in Kabul because the American was drinking water in front of police during the Ramadan fast, prompting the police officer to shoot the American. Other American troops responded and seriously wounded the Afghan.

In other violence Saturday, a Taliban attack on a NATO supply convoy in western Afghanistan killed a civilian contractor escorting the trucks, said Raouf Ahmadi, a regional police spokesman.

In the north, a Finnish convoy hit a roadside bomb, destroying one of the vehicles and injuring four soldiers, Afghan and Finnish officials said. Northern Balkh province, where the Finnish soldiers are based, has been relatively peaceful but still sees some violence. 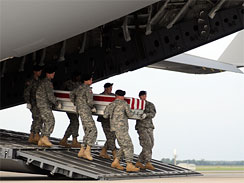 (AP Photo/Steve Ruark)
U.S. and NATO deaths dropped in September over the previous two months - possibly due to the Muslim fasting month of Ramadan or because no major offensives were launched. But since President Barack Obama's decision to send 21,000 more troops to curb the growing Taliban-led insurgency, international and civilian tolls have risen steadily.

U.S. forces mounted major operations in July and August in southern Afghanistan to try to dislodge the Taliban from longtime strongholds and improve security ahead of the Aug. 20 presidential election, the outcome of which remains in doubt because of allegations of massive fraud by supporters of President Hamid Karzai.
By Associated Press Writer Rahim Faiez