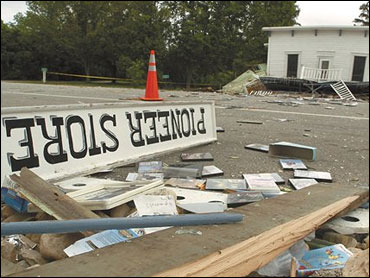 The blast struck a grocery store, a cottage and a maintenance building that contained living quarters in Ellison Bay, on Wisconsin's Door County peninsula that juts into Lake Michigan, said Chief Chris Hecht of the Sister Bay/Liberty Grove Fire Department.

"It was the most unbelievable thing that I have felt in my entire life," said Tamara Little of Milwaukee, who was staying at a nearby resort cabin. "I almost ran into this big shard of glass that was sticking out of the ground."

Investigators had not yet pinpointed the cause of the blast but suspected a propane gas leak was involved, said Charles Most, chairman of the Door County Board and the Liberty Grove Town Board.

A contractor for Wisconsin Public Service Corp. had been working in the area, said company spokesman Kerry Spees. "Some are speculating that a contractor may have damaged underground propane lines," he said.

Investigators were trying to determine whether one explosion or multiple blasts occurred, Hecht said.

Authorities relocated about 70 people after the explosion. The damaged cottage was part of the Cedar Grove Resort, where Hecht said 49 people were staying.

Jonathan Bastian, a bartender at the Mink River Basin Supper Club in Ellison Bay, said he was finishing up for the night when he heard explosions and called the emergency dispatcher.

Four people were hospitalized in Green Bay and three others were released, Hecht said. Five others refused treatment or sought medical help on their own, he said.

Ellison Bay is about 65 miles (105 kilometers) northeast of Green Bay.