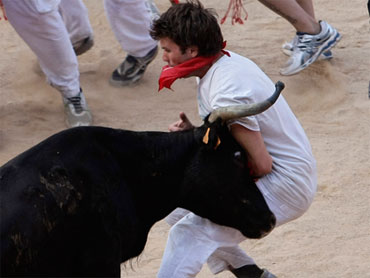 Two people were gored during the tense and dangerous second running of the bulls at the famed San Fermin fiesta on Thursday, while at least another four people were injured in falls, officials said.

Thousands took part in the dash to keep ahead of six fighting bulls and six bell-tinkling steers tasked with keeping the beasts together along the 930-yard course from a holding pen to the northern town's bull ring.

The run lasted just under four minutes and produced several moments of danger and panic, as several bulls became separated from the pack. One beast stopped just before entering the bullring and paced threateningly while staring at the runners.

TV images showed the first goring with the runner being hit in the chest and hurled to the cobblestone ground like a ragdoll. The young man stayed on the ground seemingly totally dazed.

Navarra Hospital's Dr. Fernando Boneta said one man was seriously injured after being gored in the thorax, while a second man was gored in the left leg but was in better condition. The runners' names and nationalities were not immediately available.

Four more people were hospitalized in Pamplona for injuries, mostly bruises sustained in falls during the run.

During Wednesday's run - the second of eight bull runs held during the nine-day street festival - several people were knocked to the ground and some were trampled by the animals weighing more than 1,100 pounds, but there were no gorings.

An 18-year-old runner from Melbourne, Australia, suffered three fractured vertebrae and was in serious condition at a hospital, while a 20-year-old Spanish man received an eye injury but was in less serious condition, the Navarra regional government said, without saying how they were hurt.

Tourist Jack Harrington braced himself before taking part in the second run.

"It looks exciting, like on of those things on the check list you do in life, so I might want to check it off," said the 62-year-old dentist from Lake Tahoe, California.

But retired pilot Peter Rostow, who dashed about 35 yards alongside the bulls on Wednesday, said the bulls' speed took him by surprise.

"I know bulls, but they came about a hundred times faster than I thought they would," said Rostow, 58, of Austin, Texas. "I wasn't prepared for that, and the intensity of the senses was overwhelming, the smell of the bulls, the sound of them running, and the fear."

The 8 a.m. daily run is the highlight of the drinking festival and follows a full day and night of hard partying.

The runs are broadcast live on national television.

The bulls are killed in the evening in the bull ring, and their meat is served up in Pamplona's restaurants.

Dozens of people are injured in the runs each year, most hurt in falling but some gored and trampled. Last year's festival saw the first fatal goring in nearly 15 years.