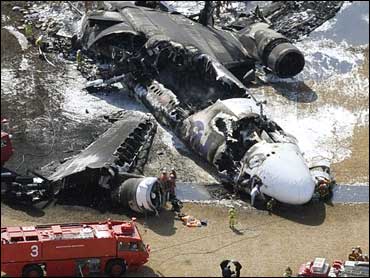 A FedEx cargo plane burst into flames after bouncing off a runway in unusually high winds at Tokyo's main international airport Monday, killing the pilot and copilot and closing a major runway for several hours.

The flight from Guangzhou, China, skipped along the main runway at Narita Airport before skidding to a fiery halt, footage from airport security cameras showed. Firefighters and rescuers immediately swarmed the plane.

The pilot and copilot - the only people onboard the flight - were pulled from the cockpit and taken to a local hospital, where they were later confirmed dead.

A spokesman at the Ministry of Land, Infrastructure, Transport and Tourism identified the pilot as Kevin Kyle Mosley and the co-pilot as Anthony Stephen Pino. He declined to give his name, citing department policy.

Mosley lived in Hillsboro, Oregon, while Pino was from San Antonio, Texas, according to online records at the Federal Aviation Administration.

CBS News correspondent Barry Petersen reports that the plane was carrying some flammable liquids as part of its cargo haul. Parts of the wreckage were still burning hours after the crash.

Unusually strong winds of up to about 47 miles per hour were blowing through Narita City on Monday morning around the time of the crash, according to the Japan Meteorological Agency.

Airport officials said it was too early to say whether the strong winds caused the crash, however, Petersen reports that the FedEx crew had been given a wind sheer advisory by the control tower, based on the landing of another plane just minutes before.

Wind sheer is a phenomenon that can quickly blow an aircraft upward and then downward in rapid succession.

Strong winds and turbulence have caused other recent incidents at the airport. Last month, a flight from the Philippines was jolted by severe turbulence as it circled prior to landing, injuring 50 passengers and crew members.

Kyodo News said it was the first fatal aircraft accident at Narita Airport since it opened in 1978.

FedEx could not immediately confirm details of the crash, spokeswoman Denise Lauer said in an e-mail from the company's Memphis office. Police could confirm only that the two crew members had died.

Ikuo Uda, a spokesman for Narita International Airport Corp., which manages the airport, said 16 international flights were canceled, and that the airport was operating with only one runway several hours after the crash.

Narita is Japan's busiest international airport, reports Petersen and the crash caused flight delays as far away as New York and London, as well as multiple cancellations and delays across Asia.

Local news reports said the plane was an MD-11, a widebody airliner built by McDonnell Douglas and based on the DC-10.

Narita Airport is a major international hub located about 35 miles east of central Tokyo. It is Japan's second-busiest airport, after Haneda Airport, a largely domestic hub in Tokyo.