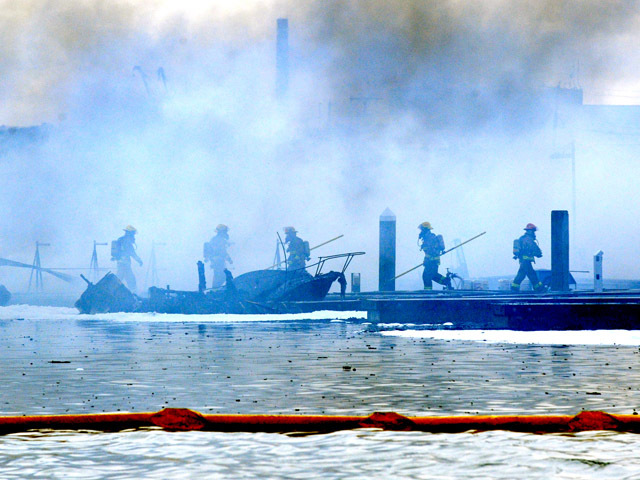 (AP) BELLINGHAM, Wash. - Investigators believe two people missing after a large fire ripped through a marina in northwest Washington state were trapped aboard a burning boat that sank during the blaze.

The fire destroyed much of a dock at the Bellingham marina early Friday. It was difficult to fight because of its size, and crews didn't have a fire boat, Fire Department Assistant Chief Roger Christensen said.

The city decommissioned an old fire boat last year and didn't replace it because of the cost.

"We were unsuccessful in securing funds to replace it," Christensen said. "We could have used it today."

There was no early indication of the fire's cause.

Police Sgt. Shawn Aiumu said there was a call from the boat on which the two lived when the fire broke out. He said divers will try to search the boat, but doing so will be dangerous because of the amount of debris in the water.

"The whole thing collapsed on the boats," Aiumu said. "It's just a mess."

"We got a portion of a call from the boat," he said. There's a high probability they were trapped."

As many as 10 vessels were in the private boathouse at the marina at the Port of Bellingham when the fire was reported around 5:30 a.m. Flames had spread to several boats when firefighters arrived, and eventually the roof collapsed. No firefighters were injured.

The boathouse and the vessels were a total loss. Officials couldn't tell Friday afternoon exactly how many boats were inside, but they likely had several hundred gallons of fuel on board.

Fuel tank explosions could be heard as thick, black plumes of smoke rose from the marina and drifted into Bellingham, The Bellingham Herald reported.

One witness, Mike Allsop, told the Herald most of the vessels were high-end fiberglass pleasure boats about 40 feet in length.

City officials said the boat was not getting enough use to justify the cost of about $30,000 a year.

Mayor Kelli Linville, who has been in office since January, said the decision not to have a fire boat was made before she assumed the job. She said it would ultimately be a City Council decision whether to now replace it.

"Part of the investigation will be whether a fire boat would've helped with this tragedy," she told The Associated Press. "Right now we want to just find out what happened."