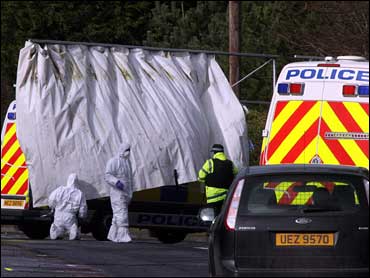 Suspected IRA dissidents who opened fire on British soldiers and pizza delivery men outside an army base shot their victims again as they lay wounded on the ground, police said Sunday.

An Irish newspaper said it received a statement from an IRA dissident group claiming responsibility for Saturday's gun attack.

It was the first killing of British soldiers in Northern Ireland since 1997. Its callousness, in targeting soldiers and civilians alike, appeared calculated to inflame community tensions and undermine Northern Ireland's Catholic-Protestant administration just as its leaders prepare to promote their coalition in the United States.

Police Chief Superintendent Derek Williamson, who is leading the hunt for the killers, said a car carrying two men both armed with assault rifles opened fire on a group of four soldiers taking delivery of food from two Domino's Pizza drivers. He said it wasn't clear whether all six were hit at that point, but he said at least one gunman then got out of the attackers' vehicle and shot the victims again at close range.

Williamson said the two dead men were army engineers in their early 20s who were about to be deployed to Afghanistan.

"It's clear from what we know at this stage that the terrorists not only wanted to kill soldiers who were there last night but also tried to kill those two pizza delivery men. That indicates to me the ruthlessness of this attack," Williamson said.

The Sunday Tribune said its chief Northern Ireland reporter, Suzanne Breen, received a telephone call from a man claiming to represent the Real IRA splinter group. Breen says he used a recognized codeword to verify he was an authorized spokesman for the outlawed gang.

Police later found the attackers' suspected getaway vehicle abandoned in the nearby town of Randalstown. No arrests were reported.

Politicians from both the British Protestant majority and Irish Catholic minority vowed that the attack would not undermine their 22-month-old coalition, the central accomplishment of a 1998 peace accord for this long-divided British territory following three decades of bloodshed.

"We will not be diverted from the direction which Northern Ireland has taken," said First Minister Peter Robinson, Protestant leader of the coalition, who canceled his planned departure Sunday for a 10-day trip to the United States. He called the attack "a futile act by those who command no public support and have no prospect of success in their campaign."

In London, British Prime Minister Gordon Brown said "the whole country is shocked and outraged at the evil cowardly attack."

"I assure you that we will bring these murderers to justice," he said. "No murderer will be able to derail a peace process that has the support of the people of Northern Ireland. We will step up our efforts to make the peace process one that lasts and endures." 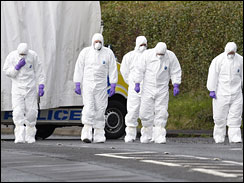 The Irish government in Dublin said virtually nobody in either part of Ireland wanted to rekindle a conflict that left more than 3,700 dead.

"We had all hoped that senseless violence was a thing of the past," said Irish Prime Minister Brian Cowen. "Violence has been utterly rejected by the people of this island, both north and south. A tiny group of evil people cannot, and will not, undermine the will of the people of Ireland to live in peace together. "

Police forensic officers in surgical-style masks and white boiler suits combed the scene of the shooting Sunday for bullet casings and any other possible evidence.

The Massereene barracks is the headquarters for the Northern Ireland regiment of the army's Corps of Royal Engineers. The regiment provides technical assistance to other army units, including communications and construction expertise, and scores of its members are currently deployed in Afghanistan.

IRA dissidents opposed to the IRA's 1997 cease-fire and the wider peace process have been repeatedly trying to kill British security personnel since November 2007, wounding several police officers in a range of gun, bomb and rocket attacks.

However this was the first successful attack on a British military base in more than a decade. More than 4,000 British troops continue to be housed in 10 bases in Northern Ireland, but since July 2007 they have been restricted from playing any role in the province's security and are rarely seen in uniform in public.

The gunmen's willingness to hit delivery men suggested that dissidents were following through on recent warnings to target civilians who did business with the army. For decades the IRA reserved the right to kill anyone who worked or provided supplies for the police and army - and their list of victims included gas station managers, cooks and caterers, construction workers and building materials suppliers.

The IRA dissidents' last fatal victim, in 2002, was a Protestant construction worker hired to help modernize a derelict British army base. He was killed by a booby-trapped lunch box.

The last Northern Ireland killing of a soldier happened in February 1997, when an IRA sniper killed a soldier as he chatted to a motorist at a vehicle checkpoint. The outlawed IRA called a cease-fire five months later.

The IRA killed nearly 1,800 people from 1970 to 1997 in a failed effort to force Northern Ireland out of the United Kingdom and into the Republic of Ireland. The IRA disarmed and renounced violence in 2005, but splinter groups using a wide range of labels have tried to continue the campaign.
By Associated Press Writer Shawn Pogatchnik