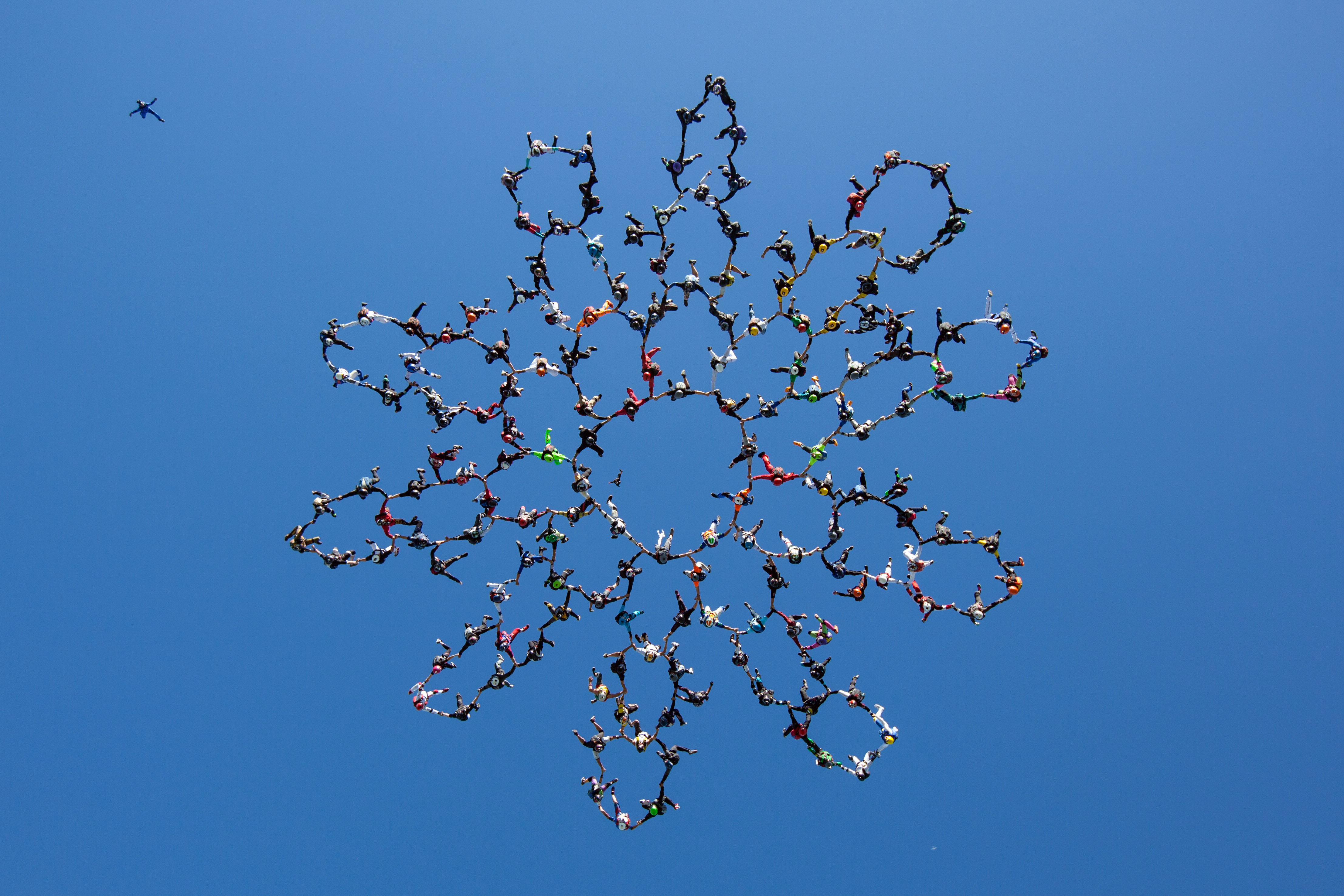 It took the international team 13 attempts to beat the 2012 mark set by 138 skydivers. The formation, resembling a giant flower, floated above the rural drop zone in Ottawa for a few seconds before the flyers broke away, deployed their parachutes, and whooped and hollered their way to the ground to the jubilation of spectators.

"It's awesome, man," said Rook Nelson, one of the organizers. "It just goes to show that if you can get the right group of people together and the right support team and good conditions, anything is possible... even on attempt number 13."

The team was selected after training camps in Spain, Australia and across the U.S. Seven aircraft were flown in precise formation to ensure that the jumpers de-planed at the right place, time and altitude. The record-breaking jumpers exited at 19,700 feet.

Skydiving videographers recorded the jump, flying above, below and alongside the formation. The footage enabled judges on the ground to verify the record was achieved above Skydive Chicago, the drop zone and airport about 80 miles southwest of Chicago where the event took place.

Three judges certified by the Federation Aeronautique Internationale -- the World Air Sports Federation -- studied the video and photos to make sure each flyer was in a pre-determined slot in the formation and has his or her hand in the correct position.

The record was not without risks.

The skydivers flew at a minimum speed of 160 mph, and some reached speeds as fast as 240 mph. Collision at such speeds can be fatal.

Jumping from such a high altitude brings a risk of hypoxia -- a condition arising from a lack of oxygen that can cause unconsciousness and other symptoms -- or even death. To reduce the risk of falling sick, jumpers and pilots sucked down pure oxygen once their planes reached 14,000 feet.

And with nearly 170 canopies simultaneously flying in the sky, there's a risk of two parachutists flying into each other.

Still, of approximately 3.2 million sport skydives in the U.S. in 2014, there were 24 fatalities, according to the United States Parachute Association.

Despite the risks, flyers came from as far away as France, Britain, Dubai and Australia -- one even spent three days traveling to Chicago from Reunion, off the coast of Madagascar in the Indian Ocean -- to participate.

"When (record) jumps work well, it's like there's a certain peace to it all, a certain harmony to it all," said Norman Kent, a longtime skydiving videographer who filmed the jump. "And it's contagious, it's like it's in the air and you can feel it even from a distance as a cameraman."