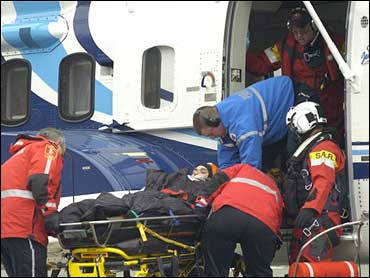 Rescuers searched freezing waters for 16 missing people Thursday after a helicopter heading to an Atlantic oil platform reported mechanical problems and ditched in the sea off Newfoundland.

Of the 18 aboard, one was rescued and one body was recovered. The others were missing about 30 miles out to sea, officials at a news conference said.

Two life rafts were spotted in the water amid the helicopter debris, but rescuers later confirmed they were empty.

The survival window is about 24 hours - but only if the people were wearing the required survival suits with water-activated locator beacons, said Major Denis McGuire of the Rescue Coordination Center in Halifax. The suits act like life vests and retain warmth in frigid waters.

McGuire said searchers had picked up signals from the suits, but there was still no sign of the missing.

The condition of survivor Robert Decker, who was flown to a St. John's hospital, was listed as critical but stable.

Jeri Grychowski of the rescue coordination center said one body had been recovered.

The water temperature was right at freezing. Winds are fairly strong in the area, with six- to nine-foot waves, Grychowski said.

"Intensive search operations continue to be under way for the other passengers," Prime Minister Stephen Harper said in Parliament. "Our thoughts and prayers are with the families who are anxiously awaiting word on their loved ones."

The crash came less than a month after a helicopter ferrying oil workers crashed into the North Sea off Scotland. All 18 aboard were rescued from the chilly waters after the aircraft landed upright a few hundred yards from the oil platform and was kept afloat by inflatable bags that deploy when the craft lands on water.

It wasn't clear if the S-92 Sikorsky helicopter, described as no more than four years old, had the same safety features when it went down 55 miles southeast of St. John's, the provincial capital.

"Mechanical problems were reported, but we don't know the nature," Transportation Safety Board of Canada spokeswoman Julie Leroux said.

The pilot had said he would try to turn back to St. John's, said Rick Burt of Cougar Helicopters, the helicopter's operator.

"This is a very difficult time," Burt said.

The helicopter issued a mayday call just before 8 a.m. EST as it was headed to two oil platforms, said Dave Bowen, also of the rescue coordination center.

The helicopter had also planned to visit the SeaRose oil platform in the White Rose oil and gas field, which is operated by Husky Energy and Petro-Canada.

The emergency room at a St. John's hospital was being cleared for the possibility of "critically ill or hypothermic people," said Deborah Collins, a spokeswoman for the Eastern Health board.