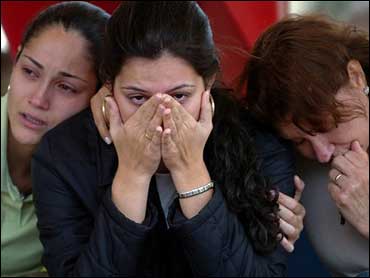 The president of Brazil's airport authority, Jose Carlos Pereira, said the newly purchased jetliner may have collided with an executive jet prior to crashing, though that was still under investigation.

If no survivors are found, it would be the worst air disaster in Brazil's history, surpassing the 1982 crash of a Vasp 747 in the northeastern city of Fortaleza that killed 137 people.

Air force helicopter pilots hovering over the crash site saw no signs of an intact fuselage and the debris appeared to cover only a small area. Pereira said the plane apparently hit at nearly 310 mph.

Pereira, said the wreckage was found near the Jarina cattle ranch, 1,090 miles northwest of Sao Paulo in the state of Mato Grosso.

"Our experience shows that when one cannot find the fuselage relatively intact and when the wreckage is concentrated in a relatively small area, the chances of finding any survivors are practically nonexistent," he said.

Pereira said the jungle where the plane crashed is so thick that authorities were planning to use helicopters to lower search and rescue crews by rope to the forest floor. Then those on the ground would cut down trees to create areas large enough for the helicopters to land.

"The jungle is so dense that we're going to have to open it up," Pereira said. "It's a very complex operation, it's extremely humid there, and there are millions of mosquitoes."

The manager of the 49,500 acre ranch said the plane may have crashed inside neighboring the Xingu Indian reservation, a 6.92 million-acre area.

"We heard a loud explosion and some of our employees saw a plane flying low," ranch manager Milton Picalho said by phone. "Judging from the direction the noise came from, I would say it crashed inside the reservation."

The flight between Manaus and Rio is popular with foreign tourists but there was no immediate word on the nationalities of those aboard.

The cause of the crash was unclear, but Pereira said the jetliner may have either collided with a Legacy executive jet or the two aircraft may have grazed each other.

"It is impossible to confirm that there is a relation between the incident which caused the (Legacy) crew to perform an emergency landing in Cachimbo and the disappearance of the Gol airplane," federal aviation officials said in a statement issued early Saturday morning.

Manaus is a major river city in the heart of the Amazon rain forest some 1,700 miles northwest of Rio de Janeiro.

Gol said in a statement late Friday that 149 passengers and six crew members were aboard the plane. Early Saturday morning, the airline released a list with 145 names. Gol did not explain the discrepancy between the number of people on the list and the number of people it said had been on board.

Some 70 family members and friends of those aboard the Gol plane were taken to a warehouse owned by Gol at the Brasilia airport to await news.

Sergio Misaci, 47, said his brother Lazaro, 58, was aboard the flight from Manaus and was traveling to Brasilia to celebrate their mother's 80th birthday.

"I have all the hope in the world. We have to root for them and have faith in God," Misaci said Friday. He added that he had lived in Manaus for six years and was sure they wouldn't find the plane for at least 24 hours.

"The trees there are 50 and 60 meters high and you can't see anything," he said.

Seven passengers were scheduled to disembark in Rio de Janeiro, where airport officials had put those waiting for the passengers in a separate room, said Wilson Fadul, a spokesman for the national airport authority.

It was the first major incident for Gol Linhas Aereas Intelligentes SA, an upstart Brazilian airline that took to the skies in 2001 with just six Boeing 737s in 2001, serving seven Brazilian cities. Gol said its jet had been delivered by Boeing Co. just three weeks ago, and had been flown for only 200 hours.

Gol has grown exponentially since it took to the skies, dramatically boosting its fleet using the same model of plane to keep costs down while giving passengers cold box lunches and soft drinks instead of hot meals and free alcohol, the norm on most Brazilian flights.

The company is now Brazil's second-largest airline after Tam Linhas Aereas SA, with more than 500 daily flights within Brazil and to Argentina, Bolivia, Paraguay and Uruguay.

It rapidly gained market share by offering low-cost tickets, modeling its service after low-cost carriers in the United States and Europe. Gol also benefited from the demise of Brazil's flagship airline Varig, which virtually disintegrated earlier this year under a mountain of debt.