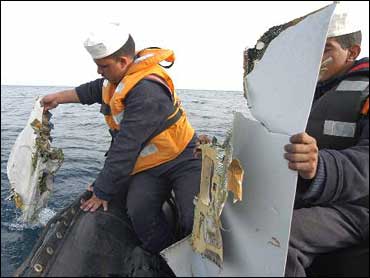 A charter jet full of French tourists returning home after vacations in Egypt crashed into the Red Sea early Saturday, killing all 148 people aboard after an apparent mechanical failure, officials said.

Searchers spent the day circling the waters in small boats looking for survivors but found only bodies, body parts and debris, including suitcases, shoes, life preservers and small bits of plane wreckage. Swimsuit-clad tourists watched the search efforts from the beach.

In France and Egypt, distraught family members gathered at airports and travel offices, desperate for news of loved ones who had been aboard Flash Airlines Flight FSH604, bound for Paris after a stopover in Cairo.

The crash occurred amid a week of heightened concerns about terrorist threats from the air that have led to increased security and canceled flights around the world.

But Egyptian Foreign Minister Ahmed Maher said the crash "is not related to any terrorist act." The Civil Aviation Ministry called it an accident apparently caused by a mechanical problem.

"There was a malfunction that made it difficult for the crew to ... save the plane," Minister of Civil Aviation Ahmed Shafeeq told state-run Egyptian television.

"We strongly believe this was an accident and nothing indicates another cause," de Robien said. "It could be an electronic failure, it could be a mechanical failure ... There can be many sources of technical hitches."

CBS News Correspondent Tom Fenton points out that, "The water where the plane went down is at least 1000 feet deep. But somewhere in the depths, (investigators) hope to find the answer to what went wrong."

At the Flash Airlines office in Cairo, one man who was checking on his daughter, a 30-year-old stewardess on the flight, walked out in despair 15 minutes later, supported by relatives.

"Samia, Samia," he wailed. Next to him, his wife screamed, "My daughter, my daughter!"

Some aboard were children, said French tour operator FRAM, which had 125 passengers - mostly families or groups of friends - from across France on the flight.

Family members hoping to pick up passengers at Charles de Gaulle airport outside Paris early Saturday were discreetly pulled aside by authorities and taken by shuttle bus to a nearby hotel.

Looking pale and shaken, a couple in their 50s arrived at the terminal, where the man asked an airport official: "My children are at Sharm. How do I find out if they were on the plane?"

"It's terrible," said Mohamed Hjiaj, whose aunt Fatima was on board. "My aunt called me just before take off. The telephone cut off at one point. Something happened."

When another plane from Sharm el-Sheik landed safely in Paris early on Saturday afternoon, anxious relatives burst into tears and rushed to hug loved ones who disembarked.

"We've just spent the longest three hours of our lives," said Sonia Aicardi, whose in-laws were supposed to be on the flight that crashed but were bumped off at the last minute. "They were to have been on the plane that crashed."

A French Foreign Ministry spokesman said that 133 of the people aboard were French tourists. A French Embassy official in Cairo said he had seen a list of people aboard that showed one Moroccan tourist and 13 crew members were also aboard. One man said his 50-year-old Lebanese sister was aboard the flight.

Shafeeq said airplane wreckage had been found as well as some bodies in the Red Sea waters, which are heavily infested by sharks.

Egypt's Middle East News Agency reported that blood was seen in the water "because sharks have eaten some of the plane's victims."

A marine official in a nearby port said at least 50 body parts had been found.

Several people - tourists and workers at a nearby Sheraton resort hotel - said they were awakened by a loud sound or explosion when the jet crashed shortly before 5 a.m. local time.

"It's scary," said French tourist Sandrine Prost. "I would never imagine that this could happen."

Most of the vacationers had been on a tour organized by FRAM, one of France's largest travel operators.

French Prime Minister Jean-Pierre Raffarin said French investigators would help the Egyptians "in order to shed light as quickly as possible on this catastrophe that has plunged our country into mourning."

An investigator from the U.S. National Transportation Safety Board was flying in at Egypt's request, and engineers from the national carrier EgyptAir rushed in to help.

Flash Airlines said in a statement that the wreckage was found about 9 miles from the airport, according to MENA.

Flash Airlines said the Boeing 737 was one of just two it owned. The company said it had been in business for six years, but provided few other details in its statement carried by MENA.

The weather was clear in Sharm el-Sheik and other flights were taking off without incident, officials said.

The jet had flown in early Saturday from Venice, Italy, dropping off passengers in Sharm el-Sheik, the airline said. The new passengers then boarded for the flight to Paris via Cairo. The airplane received its maintenance checks in Norway and the most recent showed no problems, officials said.

A Venice airport official, speaking on condition of anonymity, said the plane underwent routine mechanical and other safety checks before leaving Italy and nothing abnormal was noted.

French President Jacques Chirac and Egyptian President Hosni Mubarak expressed condolences to each other in a phone call. Egypt said it would provide a private jet to fly home the bodies of the French victims, MENA reported.

Sharm el-Sheik is a popular Red Sea tourist resort about 300 miles southeast of Cairo on the Sinai peninsula. It has also been the site of several meetings on peace in the Middle East, including one in June in which President Bush met with regional leaders about the "road map" toward creating a Palestinian state.

Saturday's crash was Egypt's biggest aviation disaster since 1999, when an EgyptAir jetliner crashed shortly after leaving New York en route to Cairo, killing all 217 people aboard.

In 2002, an EgyptAir plane with 62 people on board slammed into a hillside near the Tunis airport, killing 14 people and injuring dozens more.