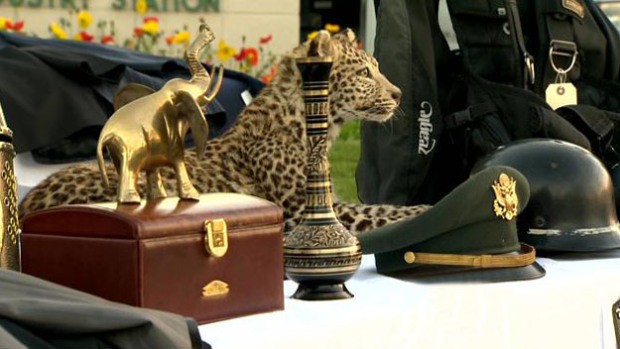 POMONA, Calif. - Authorities have filed criminal charges against 14 teenagers who allegedly broke into a Southern California mansion and held a party that caused more than $1 million in damage and losses, including the theft of a stuffed snow leopard.

Authorities say the party promoted on social media in November brought more than 100 teens to the $7 million, 90,000-square foot mansion in La Habra Heights while the owner was away. Investigators told CBS Los Angeles that the partygoers posted pictures of themselves inside the residence to Twitter.

"They were bragging about the party, showing themselves within the residence and carrying stolen property," L.A. County Sheriff's Dept. Capt. Timothy Murakami told the station.

According to investigators, partygoers entered through a window, trashed the place and stole several pricey items including designer suits, medieval armor, jewelry and the mounted leopard. Much of the loot was later recovered.

CBS Los Angeles reported that trucking magnate Nick Radoi owns the home and was out of the country when the party occurred.

The teens, who were all 15 to 17 years old at the time, face misdemeanor and felony charges ranging from trespassing to burglary and theft.

An initial court hearing was scheduled for Wednesday, according to CBS Los Angeles.