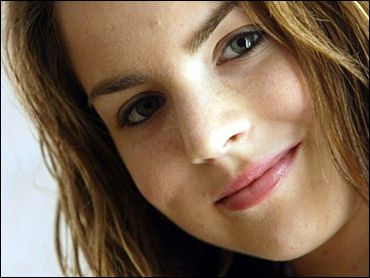 Jojo can't drive and she can't vote, but the 13-year-old whose debut single, "Leave (Get Out)," recently topped Billboard's singles sales chart can belt out a tune with the emotion of a diva.

At first listen, "Leave" — with teenage love-themed lyrics and a video set in a high school, just like Britney Spears' first song makes it seem Jojo has been prepackaged for another pop idol path.

However, Jojo prefers to downplay her age, and says the songs on her self-titled album, scheduled for release June 22, are for everybody.

"I talk about things that are real to teenagers, and to people in general," the Foxboro native told The Associated Press by phone from her new home in Edgewater, N.J. "It reaches a broad audience and that's important."

Jojo, born Joanna Levesque, said the album encompasses many genres, including the reggae-influenced "Baby It's You," which will probably be her second single. But it's primarily R&B-influenced, particularly with her cover of the hit 1992 SWV ballad "Weak."

Jojo belts out the hook over the phone, proving she could improvise a melody well enough to turn the heads of Beyonce or Christina Aguilera. And that's when Jojo's voice reveals an emotion that seems beyond her years.

"We go through things on a little smaller scale than adults, but still there's drama — and that stuff with boys," she said.

That's part of the reason Jojo loathes the term "child prodigy" and protests the contention that "she doesn't know what she's singing about."

"Nothing is easy. That world does not exist in the world of contemporary pop music," said Steve Leeds, a promotion executive who has worked with record labels and MTV. "If you want it, you've got to make a commitment. You've got to work hard."

"A record company will use you up, throw you out, and they'll be on to the next, but it's the parent's responsibility to make sure there's a whole sane human being left at the end of the day," said Gibson, who signed her first record deal at 16 and went on to record several hits, including "Only My Dreams" and "Foolish Beat."

Gibson said if Jojo remains grounded, works hard and has the right people to support her, she will have a good chance for success.

If Jojo isn't on guard, it's clear her manager-mother, Diana Levesque, is.

"I'm protecting her because this business is so notorious for being sleazy," Levesque said.

Perhaps that's why she turned down the first three major deals that her daughter was offered before signing with Blackground/Universal.

And when it comes to wardrobe, high heels and lyrics, "there's definitely been issues ... she's my little girl," Levesque said.

She has been protecting her only child for Jojo's entire life.

While many children her age were hanging out at the mall on weekends, Jojo was often on free or reduced-lunch programs. Her mother earned a living cleaning houses and singing for churches, and the two shared a bed in their one-bedroom apartment in Foxboro.

"My friends would want to go to the movies and go to the malls, and most of the time, I couldn't," she said.

Jojo performed any small gig she could find, and her mother would save her hard-earned money to make sure the two could afford travel expenses.

"I was always so passionate about this," she said, adding that her mother did not always share the excitement. "I'm so glad she was like, 'Okay. I'll do this if you really want to.' And I really did."