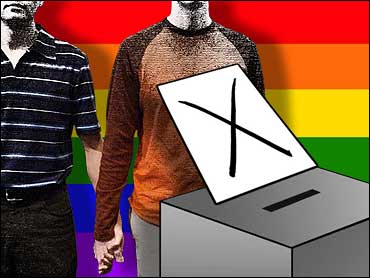 In a resounding, coast-to-coast rejection of same-sex marriage, voters in 11 states approved constitutional amendments Tuesday limiting marriage to one man and one woman.

The amendments won, often by huge margins, in Arkansas, Georgia, Kentucky, Michigan, Mississippi, Montana, North Dakota, Oklahoma, Ohio, Utah and Oregon — the one state where gay-rights activists hoped to prevail. The bans won by a 3-to-1 margin in Kentucky and Georgia, 3-to-2 in Ohio, and 6-to-1 in Mississippi.

"This issue does not deeply divide America," said conservative activist Gary Bauer. "The country overwhelmingly rejects same-sex marriage, and our hope is that both politicians and activist judges will read these results and take them to heart."

The Ohio measure, considered the broadest of the 11 because it barred any legal status that "intends to approximate marriage," gathered equal support from men and women, blacks and whites.

In Georgia, Ohio and Mississippi, gay-rights activists were considering court challenges of the newly approved amendments. But supporters of the bans were jubilant.

"I've said all along that this crossed party lines, color lines and socio-economic lines," said Sadie Fields of the Georgia Christian Coalition. "The people in this state realized that we're talking about the future of our country here."

Conservatives had expected all along that the amendments would prevail in at least 10 of the states, thus demonstrating widespread public disapproval of court rulings in favor of gay couples. National and local gay-rights groups campaigned vigorously in Oregon, where polls had showed a close race, but they failed to prevent a sweep.

"That certainly is disappointing news that many Kentucky voters would think it's appropriate to write discrimination into our constitution," said Beth Wilson of the American Civil Liberties Union of Kentucky. "People get harmed when their relationships are not respected, and this means that relationships won't be respected."

None of the 11 states allow same-sex marriage now, though officials in Portland, Ore., married more than 3,000 same-sex couples last year before a judge halted the practice. Supporters of the amendments contend the measures are needed as an extra guard against state court rulings like the one in Massachusetts a year ago that legalized same-sex marriage there.

The proposed amendments in Mississippi, Montana and Oregon referred only to marriage, specifying that it should be limited to unions of one man and one woman. The measures in Arkansas, Georgia, Kentucky, Michigan, North Dakota, Ohio, Oklahoma and Utah called for a ban on civil unions as well.

In most cases, those additional provisions generated extra controversy. Some prominent Republican politicians and GOP-leaning newspapers, while stressing that they opposed same-sex marriage, spoke out against the amendments on grounds that the measures might prevent the extension of even very limited partnership rights to unmarried gay and straight couples.

In five of the states, legislators placed the proposed amendments on the ballots, while in the six others — Arkansas, Michigan, Montana, North Dakota, Ohio and Oregon — the measures were advanced by conservative, church-backed citizens groups that collected signatures on petitions.

Already this year, voters in Missouri and Louisiana have weighed in on the issue, with same-sex marriage-ban amendments winning more than 70 percent of the vote in both states.

Louisiana's amendment was later struck down in state court on the grounds that it improperly dealt with more than one subject by banning not only same-sex marriage but also any legal recognition of common-law relationships, domestic partnerships and civil unions. The court challenge in Georgia involves a similar argument.

Regardless of Tuesday's results, the same-sex marriage debate will rage on.

Conservatives say they will continue to press for a federal constitutional amendment banning it, on the premise that even toughly worded bans in state constitutions could be overturned by the U.S. Supreme Court.

Gay-rights activists, meanwhile, will continue pressing marriage-rights lawsuits in states like Oregon, California and New Jersey, where they believe the high courts might eventually rule in their favor.