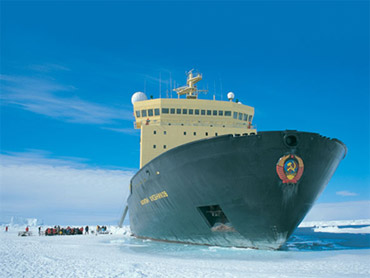 A Russian shipping company says one of its cruise ships carrying over 100 tourists, scientists and journalists is stuck in the ice around Antarctica.

German Kuzin of the Fareastern Shipping Company says the Captain Khlebnikov icebreaker and the tourists onboard aren't in any danger.

He told Russia's Vesti 24 television on Tuesday that the ship is waiting for a stronger wind to try to begin moving again. He said the icebreaker is about 5 miles from clear water.

Kuzin said the tourists are using the unplanned stop to tour the surrounding area. Russian news agencies say a BBC camera crew is among the passengers.