About $50 million worth of artifacts and antiques were shipped from both Egypt and Turkey to the United States in 2016 — the highest annual value from each of those countries in at least 20 years, according to U.S. Census Bureau documents.

The artifacts, totaling about $100 million between the two countries, were imported “for consumption” and not for temporary display in a museum, the documents say. Most of the artifacts were shipped to New York City, where numerous antiquities dealers, auction houses and art galleries are based. It can be difficult to determine whether a shipment of artifacts was recently looted, law-enforcement officials told Live Science.

In addition, the actual resale value of the shipments may be higher, because the values seen in the documents are simply those that importers declared, a spokesperson for U.S. Customs and Border Protection said. Audits are occasionally conducted on shipments, but the spokesperson declined to say how often they occur. [See Photos of the Artifacts from Egypt and Turkey]

Egypt has experienced extensive looting since the country’s 2011 revolution. The looting is linked to the deaths of children (they were killed while working in narrow looting shafts) and antiquities guards (who were shot dead while trying to protect sites). An agreement between the United States and Egypt designed to curtail the antiquities trade was signed in November 2016 and went into effect near the end of that year.

Meanwhile Turkey shares a vast border with both Iraq and Syria, two countries that have experienced heavy looting as a result of ongoing wars. Last year, a Live Science investigation revealed that artifact shipments between Turkey and the U.S. increased after Iraq was invaded in 2003, and then increased further after the civil war in Syria started in 2011. Scholars and multiple governments (including the United States) have documented that artifacts are being sent from Iraq and Syria to Turkey before being sold abroad. Additionally, a coup attempt occurred in Turkey in July 2016, although scholars and law enforcement officials declined to speculate on whether the coup attempt is leading to more artifacts being shipped from Turkey to the US.

The documents reveal that the import of “antique” gold coins (defined as being over 100 years old) made up a significant part of the shipments from Turkey and Egypt in 2016.

For comparison, the documents also reveal that between 1996 and 2003, in that entire span, less than 1 lb. of antique gold coins was shipped from each of those two countries to the U.S.

A Live Science investigation published in 2016 found that the number of antique gold and nongold coins shipped from Turkey to the U.S. has increased steadily since 2003, when the Iraq War started. A separate Live Science investigation, also published in 2016, revealed that the number of gold and nongold coins being shipped from Egypt to the U.S. increased after the 2011 Egyptian revolution. [See Photos of the Looting in Egypt]

The process of identifying looted artifacts coming into the U.S. can be difficult, law-enforcement officials and scholars told Live Science.

The U.S. Census Bureau documents show that many of the artifacts are shipped under vague headings, such as “antiques of an age exceeding 100 years.” Another vague heading simply states that the artifacts in a shipment are “Collection and Collectors’ Pieces of Archaeological, Historical or Ethnographic Interest.”

Additionally, in response to Live Science’s Freedom of Information Act request, U.S. Customs and Border Protection officials told us that senders of artifacts or antiques shipments to the U.S. are not required to send photos of the objects they ship, and customs inspectors do not usually take photographs.

Privacy laws prevented Live Science from accessing the paperwork filed with shipments. However, it can be difficult to prove that an artifact was looted based on this paperwork, said Erin Thompson, a professor of art crime at the City University of New York.

“Middlemen are experts in making looted and smuggled antiquities look like they are part of the legitimate market by cleaning and restoring them and creating forged paperwork that makes it seem like Egypt gave permission for its export,” Thompson told Live Science last year in an email.

In addition to Customs and Border Protection, which patrols the U.S. border and audits shipments, U.S. Immigration and Customs Enforcement (ICE) conducts investigations into looted artifacts that are already in the country, said Brendan Raedy, an ICE spokesperson. Raedy told Live Science that the agency has an attaché in Cairo who sends information about stolen artifacts and looted archaeological sites.

ICE officials have noticed that those who bring looted or stolen artifacts into the United States tend to hold on to them for years before trying to sell them, Raedy said. “The stuff that you’re seeing popping up, that we’re getting our hands on now, in a lot of cases was stolen or looted [in] 2007 to 2012,” Raedy told Live Science.

This makes it difficult to determine what kind of looted artifacts have been shipped to the United States in recent years. “In terms of really digging into the physical trends … we’re probably a little bit away from that at this time, unfortunately,” Raedy said.

ICE agents are working with museums and owners of antique stores, teaching them how to detect looted or stolen artifacts, he noted.

Another problem, Raedy said, is that sometimes, looted artifacts are brought in under declarations that have nothing to do with artifacts. For instance, in November 2016, ICE agents returned an eighth-century-B.C. mummy hand to Egypt that Raedy said had been shipped to the United States as a “science fiction movie prop.”

The explosion killed at least one person and left six others dead in northwest Baltimore on Monday.

It's unclear how all of the president's measures will be implemented, and they're likely to be challenged in court. 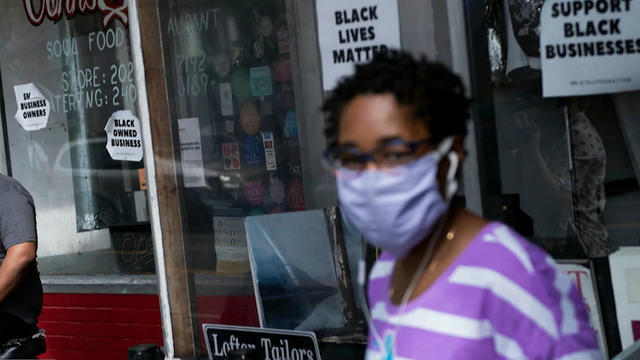 Will a coronavirus vaccine help those who need it most?

There is a lack of trust between minority communities and the health care system, Dr. Uché Blackstock said.