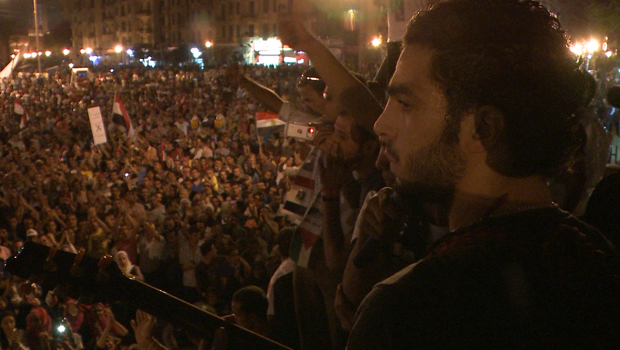 Eight months after ousting President Hosni Mubarak, whose regime repressed and tortured citizens for decades, Egyptians are now facing the same treatment from the country's military. Bob Simon reports from Egypt, where he meets the troubadour of the revolution, Ramy Essan, a musician who continues to sing protest songs, despite the brutal torture he has endured. "I just want Egypt to be better," he says.

Editor's Note: Egypt's military ruler today ordered a halt to military trials of civilians. But Human Rights Watch called today's announcement by Field Marshall Hussein Tantawi "insulting" because it doesn't completely spare civilians military justice. They say there is a long list of crimes that are still punishable by military courts and that the decree makes no mention whether the 12,000 civilians already tried by military tribunals will be acquitted or retried by civilian courts.

The following script is from "Revolution" which aired on Oct. 9, 2011.

When the people of Egypt rose up in January and threw out the dictator who had ruled them for 30 years, it was called a Facebook Revolution. We went back to Cairo last month to see what was going on eight months after this revolution; how many of the people's dreams were being fulfilled. What we found was that even though Mubarak was on trial - something Egyptians thought they'd never see - the military, now in control, had reinstated the dreaded emergency laws. It was arresting activists by the thousands, outlawing strikes, clamping down on journalists and that's not all. We found that people opposing the current regime were being tortured, just as they'd been under Mubarak.

Eight months ago this might have been the happiest place in the world, a traffic circle named Tahrir Square, where people overthrew a dictator in 18 days. Well, the people are back again but the happiness is gone. That's because many feel that the revolution has been taken away from them - that the army which supported them during those heady days is now saying, 'Go ahead, demonstrate if you want to, but we are in control as we always were.'

For three decades, Mubarak's generals kept him in power. But when protesters took over Tahrir Square, the soldiers stood by and let it happen. To give you a sense of what role the military played back then and since, we'll tell you the story of one man, a student named Ramy Essam. He came to the square with his guitar, started strumming, like a young Bob Dylan. Before long, he was on stage, singing a song he'd made up on the spot, "Down Down Hosni Mubarak." That had never been sung before.

Ramy became the troubadour of the revolution. But after a week, the Mubarak regime decided to close down the show. It sent in thugs on horses and camels to empty the square. They beat up Ramy but he kept on fighting and was still there the next morning.

[Ramy Essam in square: Yesterday they hit us with rocks and they shoot with guns, they hit a lot of us... I had a rock in my head... here... but I am okay and not sad and we will stay here until Hosni Mubarak will go away.]

And Ramy did stay. He got back on stage, a bandaged singer serenading a bandaged audience. The protests grew, women, children and crucially, millions of workers. Eight days later, Mubarak was gone.

Bob Simon: You must have felt happier than you'd ever felt in your life.

It was the happiest moment for everyone. Egyptians were shocked at what they'd accomplished. The soldiers were treated like liberators. The generals, the Supreme Council of the Armed Forces, as they're called, were applauded as well. They appointed a transitional government and promised free elections in six months. Meanwhile, they kept the power.

Simon: Who are these guys?

Hossam El-Hamalawy: These are the generals who made it to the top of the army, simply because they enjoyed Mubarak's confidence.

Blogger and labor activist Hossam El-Hamalawy who has been fighting the Mubarak regime for years is convinced the generals were against them from the start.

El-Hamalawy: Don't you think that the-- that the Supreme Council for the Armed Forces wouldn't have loved to nuke us in Tahrir during the revolution?

Simon: Do you think so?

El-Hamalawy: Oh, yeah. I mean, if it was up to them, it-- they could have gotten away with it, they would have nuked us. But why didn't they do that? Because they knew that the soldiers and the conscripts and the young officers they sent to us in Tahrir, they wouldn't have opened fire. Because they are just as oppressed as us.

Having the generals in control was not what the protesters had in mind. After Mubarak had left and the world thought the revolution was over, they reoccupied the square, demanding to be heard. A month later, the generals had heard enough. They insisted they would clear the place of demonstrators and thugs.

Troops invaded the square, rounded up hundreds of activists. They spotted the troubadour Ramy Essam and without explanation dragged him a hundred yards to the Egyptian Museum, where they had set up a prison. They began beating him with clubs and steel rods and that was just for starters.

Simon: The officers were jumping on your back?

Simon: And on your head?

Essam: And-- th-- that's happen for about two hours.

Simon: They were doing for two hours?

His head was face down in the dirt. He wasn't moving. Then a senior officer came by.

Simon: Do you think he really thought you might be dead?

Essam: Yes. Because they tortured me very badly.

Simon: And you weren't moving. Okay, so then the officer left. And did they leave you alone then?

Essam: They started to electrocuted me.

Simon: They electrocuted you?

Simon: With a cattle prod?

Simon: Where did they put the prod?

Essam: Over-- all my over my body.

When they had finished, they shoved him into a cab. When his friends found him, this is what they saw. And remember, this was happening a month after Mubarak had left.

Essam: When I was tortured I decide to-- to be silent and calm to make them angry.

Simon: You never said, "Please stop?" It's amazing. When they were torturing you, you didn't scream?

Essam: No. I just decide to be silent.

Simon: One can decide to do many things. But one is not always capable of doing these things. How could they be hurting you so badly and you didn't make any noise?

Simon: You were shocked?

Essam: 'Cause they are Egyptian.

And these Egyptians are treating detainees the way they did when Mubarak was in charge. This video was placed on YouTube two weeks ago. The military said it would investigate the incident.

And Tuesday night this is what happened to a Coptic Christian who'd been protesting a Muslim attack on a church. The footage was also placed on YouTube.

Twenty-five year old Mona Seif has been marching along that road since the very first days. She is leading the campaign against military trials, which has become the rallying cry of the revolution. More than 12,000 civilians have been arrested and tried in military courts since February for everything from "thuggery" to "threatening the security of the Egyptian state."

Simon: So what happens in a military trial?

Simon: What do you mean by "rapid"?

Seif: "Rapid," I mean that most of the cases we know they get arrested, they get sentenced in three days.

Simon: What kind of legal representation do they have?

Seif: In many of the cases, the regular ro--the real lawyers were not allowed, were not-- allowed to access the courtroom.

Mona and her colleagues have interviewed dozens of families of the detainees and put their testimonies up on the web. All the families know is that their relatives are missing. They know nothing about charges, verdicts or sentences.

Simon: When you accuse the army of military trials, the army says, 'Look, these are exceptional times. We need exceptional measures.'

Seif: We don't need exceptional measures. If you talk to professional legal personnel they will tell you our legal system is capable of handling this. It's very obvious that their method has not done anything because the thugs are not behind bars. It's the poor people who are behind bars. It's the revolutionaries. It's people who dare to stand up against the regime.

We asked members of the regime for an interview. They declined.

Defense Secretary Panetta met with the generals this week. Afterwards Panetta said they did not tell him when they would hand over power to a civilian government, or when they would lift the state of emergency or end military trials. But he did not sound discouraged.

Panetta: I really do have full confidence in the process that the Egyptian military is overseeing and I think they are making good progress.

The Egyptian military receives $1.3 billion a year from the United States and owns huge chunks of the Egyptian economy. Are they going to give all that up?

El-Hamalawy: No, they are not. But that's what a revolution is all about, you know? No elite in any country. No rulers in any country would give up power very easily.

Simon: No. But, don't you agree that the next president of Egypt is gonna be a lot better than Mubarak?

It's a river, the Nile that brought Egypt to life. And for 7,000 years this oasis of a nation has been ruled by pharaohs, dictators, conquerors and kings. But, democracy? It's never been here, so it's got to be considered a long shot. But then again, there's never been a revolution in Egypt. And once a revolution gets going, it's not always easy to make it stop.

Millions of workers are on strike in almost every sector of the economy: teachers, students, bus drivers, engineers. They all have the same demands: a sharp increase in wages and the removal of their bosses: Mubarak's cronies, who are still in charge.

And Ramy Essam? Like so many others, he has simply forgotten how to be afraid. He's back in Tahrir Square, performing. Same tune. Different lyrics. Instead of "down with Hosni Mubarak," he is singing "down with military rule."

Simon: Is that wise? Is that a smart thing to do?

Essam: I just want Egypt to be better.

Simon: You want Egypt to be better?

Essam: I just want to take my freedom.

Simon: And they may take you away again--and do what they did before and maybe even worse.

Essam: No. What happened to me makes me believe that-- they are the bad guys, not us. We are right, they are wrong.

Simon: It's that simple?